A celebrated design at BMW and within the auto industry, the 8 Series is a modern classic penned using CAD tools and the wind tunnel. The cooler and costlier sibling of the 6 Series also happens to be the first road-going car to combine a V12 with a six-speed manual, and back then, it was one of a handful of road cars fitted with drive-by-wire throttle.
43 photos

Revealed at the 1989 Frankfurt Motor Show, the E31 as BMW refers to the sleek-styled coupe is one of the first Bimmers to feature a multi-link rear axle. Unfortunately for the Bavarian automaker, the 8 Series didn’t sell as well as originally anticipated over unforeseen events such as energy price spikes, the Gulf War (1990 to 1991), and a global recession (1990 to 1992).

Given these unfortunate circumstances, a luxury-oriented grand tourer with twelve cylinders didn’t sell particularly well. The U.S. market accounted for 6,920 examples until BMW discontinued the nameplate from North America. Production came to a grinding halt in 1999 after 30,609 units were produced, all of them at the Dingolfing plant in the southern part of Bavaria.

Coincidence or not, the second-generation 8 Series in all three body styles is made in Dingolfing, although it’s a different animal from its forefather. From the aesthetic qualities to the underpinnings and technology, there’s simply no way one can put an equals sign between the old and new models.

The Sketch Monkey did, though, but in his own way. The pixel artist starts his rendering by making the side windows a bit smaller. A more pronounced Hofmeister kink, larger wheels, stickier tires, pop-out door handles, slimmer mirrors, pumped-up fender flares, LED lights, and a more stylized front bumper with two vents on the sides pretty much sum up this redesign.

The 35:65 ratio between the greenhouse and body shell helps the modernized E31 stand out in the crowd, which is what an 8 Series is all about. The second generation, although nice, doesn’t have the visual pizazz of its predecessor. 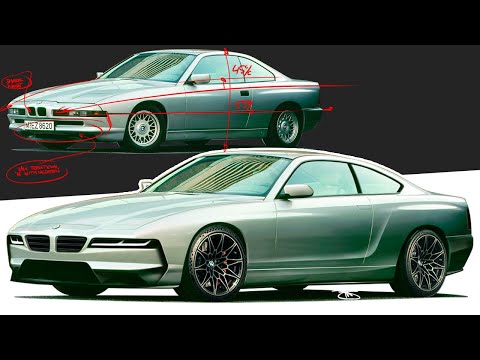