Mihnea Radu
They say you can't help loving the cars you grew up loving and that you should never meet your idols. But Carwow magazine didn't want to follow rules and set up a drag race between three iconic German performance machines, namely the RS4, C63 AMG, and BMW M3.
4 photos

All three belong to the same era of awesome-sounding German V8 engineering, and while time has proven some of these aren't that reliable, we still see them through rose-tinted glasses. How can we not?

Let's look at the contenders before we let drag racing magic happen. In the quattro corner, it's the B8 version of the RS4. Americans didn't get to buy this setup, but the 4.2-liter FSI is similar to the one in the classic R8 and pushes out 444 hp plus 317 pound-feet (430 Newton-meters) of torque. The only car with a wagon body and AWD is a bit bulky at 3,975 pounds (1,795 kilograms).

Everybody's favorite here is probably the old W204 C 63 AMG. Back in the days when the AMG came after the model number, this beast came with a hand-built 6.2-liter V8 making 454 hp and 443 lb-ft (600 Nm). It's a bit lighter than the RS4, but will that compensate for the traction problems?

Yes and no. Even though it's not remembered as the performance hero of its era, the old RS4 wins the first drag race convincingly, getting better launches. But they do more races, and after its tires are warmed up, the C 63 is faster.

These are performance icons from a bygone era. So rather than focusing on who won what, we'll just quietly appreciate these old-timers. Except for the C 63. That's been ruined with suspension airbags. 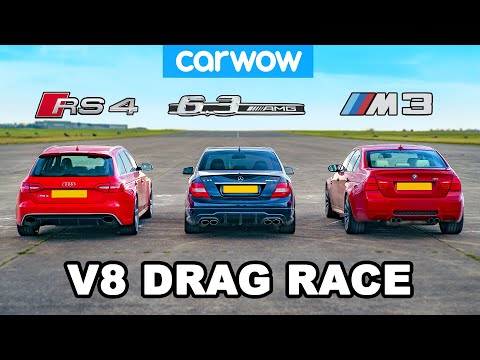