1 BMW M760Li vs. M3 Competition Drag Race Proves V12 Are Better Than Everything

5 BMW i8 vs Porsche Carrera S Drag Race
Car video reviews:
Up Next

Sure, you can buy an electric SUV from Jaguar, Audi or Mercedes. But none of them do what the Tesla Model X can: win drag races and be a 7-seater. Which is why it's being compared to the BMW X7 and Mercedes GLS today.
3 photos

The GLS is the newest model here, but you'd be forgiven for not noticing that because the BMW X7 is so much bolder in its design. Also, the Tesla Model X has drag raced the Bimmer before at the hands of TFL Car. However, the British review from Carwow now lets us sample some different powertrains.

More specifically, the Mercedes full-sized SUV is present in GLS 400 d form, which means it's powered by a new straight-six bi-turbo diesel engine. In the interest of the drag race, we'll mention that this makes 330 hp and 700 Nm (516 lb-ft) of torque.

Keeping the metric system in mind, the Tesla Model X is supposed to have 470 hp and 750 Nm (553 lb-ft). You already know that it's not going to play fair, with the launch of the twin electric motors being amazing.

Finally, we have the X7. BMW was supposed to make a V12 model, but that doesn't seem to be happening. Instead, the M50i retains its crown and delivers 530 hp and 750 Nm (553 lb-ft) from a bi-turbo 4.4-liter V8. But will the biggest displacement here be enough?

In standing acceleration test, the Bimmer scores an easy victory, not only because of its extra power but also the launch control function. What follows is a rolling race from 50mph, where Tesla shows the advantages of instant power delivery.

Of course, the test is completely unfair. The X7 is available with a much less powerful 40i configuration that would have lost to Tesla. On the other hand, if you want a powerful GLS, there's now an AMG powerhouse available. 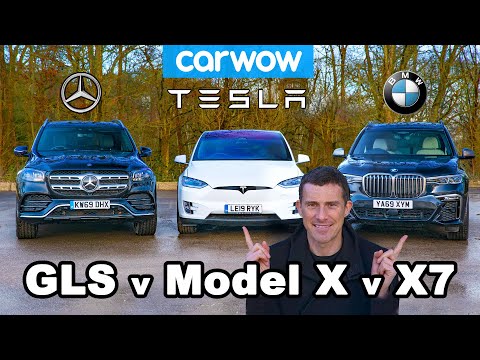