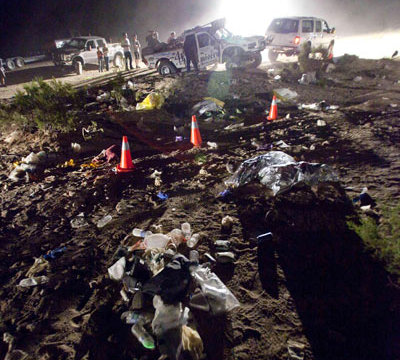 Following the horrifying off-road accident which claimed the lives of eight people last Saturday near Lucerne Valley, the US Bureau of Land Management (BLM) decided to suspend the permits of the organizers of the event, Mojave Desert Racing.

According to The New York Times, the permits will be suspended for the duration of the investigation which tries to shed some light into the crash. The decision has been made because the race was being held on federal land administered by the bureau.

The bureau found during its investigation that Mojave Desert Racing also failed to comply to what the permit allowed them. Although at most 300 spectators would be allowed, the event was attended by several thousands. In addition, racers were forced by the permit to slow down to 15 miles per hour when within 50 feet of the fans.

Last Saturday, a heavily modified 2000 Ford Ranger crashed into the crowd on the side of the road as it raced in the beginning of the race at 45 to 50 miles per hour. The driver of the truck, 28 year-old Brett M. Sloppy lost control of the vehicle as he jumped over a bump, and ended up upside down on top of several spectators.

As it can clearly be seen from the footage taken at the scene, there were no guardrails separating the crowd from the road on which trucks were speeding. Initial findings show that the spectators were located within 10 feet of the track (3 meters).

Authorities so far have pinned nothing on the driver, given the fact that the crash did not occur on public roads, meaning state vehicle codes don't apply. According to officials, there was no alcohol found in Sloppy's blood.