4 Beyonce Escapes Crash
Up Next 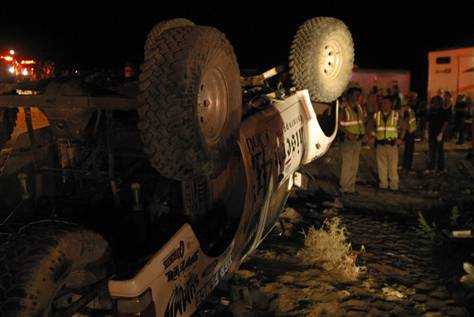 The California 200 off-road race held yesterday near Lucerne Valley, 100 miles (160km) from Los Angeles, started and ended in tragedy, after one of the competing trucks, a Prerunner, went over a jump and ended up upside down on top of several spectators.

According to San Bernardino County sheriff's spokeswoman Cindy Bachman, cited by the Associated Press (AP), eight people were killed as a result of the crash and another 12 have been injured. Most were transported to the Loma Linda University Medical Center or St. Mary's Medical Center with the help of the seven ambulances and 10 emergency aircraft who rushed to the scene.

"When I got up to the vehicle I could tell that several people were trapped. There were just bodies everywhere," David Conklin, an off-road magazine photographer told AP. "One woman with a major head wound lying in a pool of blood. Someone else was crushed beneath the car."

According to witnesses, the Prerunner truck was in the line of first 20 trucks aligned at the start. The crash occurred shortly after the start of the race. The driver of the Prerunner was not seriously hurt, but had to flee the scene to escape the wrath of the mob which charged and began throwing rocks.

The cause of the crash is not yet known. The incident is currently investigated by the California Highway Patrol and the federal Bureau of Land Management. Initial findings show that the spectators were located within 10 feet of the track (3 meters). There were no guardrails separating the track from the spectators.