VW Tiguan on Bentley Wheels: It Was Bound to Happen

MINI Gets Rendered as Mid-Engined Supercar, Is Barely Recognizable

Between the new Supra and Corvette, it's pretty clear that we're witnessing a renaissance period for the sports car. We don't know how long it will last, but other big automotive names might join in on the action.
2 photos

It's pretty obvious that the MINI brand is stuck in a rut right now. Banking on the nostalgia factor can't work forever, and the Countryman is only selling at acceptable levels because it's a crossover, not based on good design or anything like that.

Thus, it would be wise for the British brand to reinvent itself before it's too late. But isn't a supercar or anything mid-engined too bold of a move? Obviously, yes. But with the right amount of power and at the right price, it would sell.

YouTuber TheSketchMonkey usually turns existing photos into new cars, but this time, he started from scratch. He first examined every feature that makes a MINI a MINI. These include the round headlights, chunky wheels and a body that looks as round as a pebble.

If you think about it, the modern Cooper looks somewhat similar to a vintage Porsche 356. So the rendering is a bit like a 911. The round lights are angled back and the hood is very short. Its long side windows tapering into a short rear deck are also noteworthy.

Of course, MINI would have a hard time developing another engine just for this project. The company basically only has two setups in a number of configurations, the 2-liter turbo and a 3-cylinder with a couple of displacement variations. A 'supercar' would need at least the BMW M3 engine. But if you could have that in something mid-engined, why would you ever go to BMW in the first place?

We'd be just as happy with the 2-liter turbo. A hybrid might also be interesting, with rumors talking about a 400 horsepower setup for an M140e hot hatch from BMW. We'll take one of those as long as it's cheaper than your average Porsche Cayman. 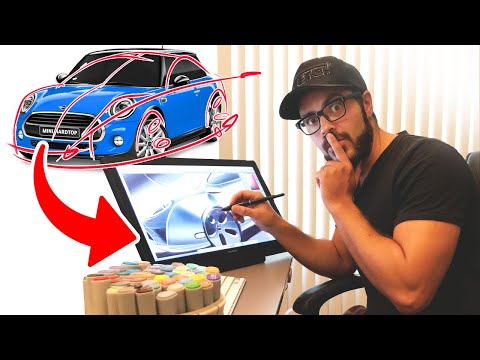