3 You Can Get a Fully-Custom Tiny House, Glamping Unit, or Office From Upcycled Airplanes

4 Transformable Tiny House Is a $44,000 Magical Home Built From Scratch

5 GlamBOX: In This Rustic Tiny House, the Master Bed Is the Only One With Wheels
Car video reviews:
Up Next

How small can you go when it comes to the size of your house and the number of comfort creatures it fits, yet not lose that sense of “home”? A tuk-tuk is the least likely choice for a camper slash motorhome, but that doesn’t mean it’s not a good one.

Meet Tukaya, the Tiniest Tuk-Tuk Camper With Dreams of a Micro-House and a Heart of Gold

Living small or, as it’s more widely known, downsizing, has become a life goal in and of itself over the past couple of years. Environmental and economic considerations, together with the high degree of Instagram-ability of the lifestyle, have turned micro-houses, whether they’re RVs or tiny homes, skoolie conversions or all manner of campers, into must-haves.

This one is even more special. It’s called Tukaya and it’s a tuk-tuk conversion that serves or, at the very least, served, as a full-time rolling residence for a grown adult. Tukaya dreams of being a micro-house and it is one through functionality and long-term use, but it also has a heart of gold, having been created to serve as a platform for a variety of causes.

Tukaya is the brainchild of Andrew Arnott, a 3D visualizer at an architecture firm in Johannesburg, South Africa. He started toying with the idea long before the tiny house movement went mainstream (as it is today), and he was working on the conversion in 2017, all on his own. He never went into the full details of the project, but this is known: Tukaya is a Piaggio Ape three-wheeler that was once used as an ice cream van.

Arnott bought it used and had it brought on a trailer to his home, where he proceeded to strip it of its shell and to build a new frame for it out of wood. After several months, he ended up with a proper but very tiny home for himself, measuring a meager 4.5 square meters (48.4 square feet) but somehow still big enough to fit inside a one-person bed (a mattress, in reality), a toilet, a kitchen, storage, and even some art on the walls.

Access inside the Tukaya is done through the rear, which opens hydraulically and serves as billboard for ads in road mode. The roof partially lifts in the manner of a pop-up tent, allowing Arnott to sit upright on the bed and giving him a bid more headroom when he’s standing. The toilet is hidden under the bed; there’s a large window on one side for natural light, a fan for temperature control, a cabinet for storage and hooks to hang up more stuff.

Outside, Arnott included a pull-out pantry and a fold-down table that doubles as both counter and kitchen bar. He has a mini-fridge that he powers up with solar panels, a camping gas cooker, and the basics for meal-prep, including cutlery and pots.

The base vehicle is a Piaggio Ape tuk-tuk, as noted above, so even cramming all this stuff inside seems impressive – but it’s down to the frame built by Arnott. Power comes from a 400cc diesel engine, capable of taking the micro-home to a top speed of 40 kph (25 mph) – not that you’d want to go any faster in a three-wheeler with this much weight on top. As Arnott says in the 2019 interview available at the bottom of the page, driving it is knowing you’re heading somewhere not particularly fast, while enjoying the journey.

Not that speed was ever a priority for him. Arnott built the Tukaya because he needed a moving platform for some of his favorite charities, particularly an animal rescue center. He also wanted to raise awareness on the benefits of micro-houses and he thought it would be a good way to spread it by getting a taste of this lifestyle himself.

“This project has been inspired by: the growing tiny house/micro-apartment movement worldwide, inclusive communities and cities, the Minimalists movement and the general reuse, repurpose, preserve culture that is required to achieve a more sustainable lifestyle,” Arnott explains. “I want to explore how I could use these ideals to create a solution for myself and others to empower individual wealth creation.”

His goal at the time of the 2019 interview was to make it one full year in the Tukaya, living in it on friends’ driveways or wherever he was welcome for a modicum of a fee. He set off on his (slow-speed) journey in December 2018. As far as we can tell, as of the initial lockdowns of 2020, he was still calling Tukaya his home, which would mean he came very close to his two-year goal.

Tukaya is not the first time a tuk-tuk has been used as base for a camper, but it’s definitely a stand-out. 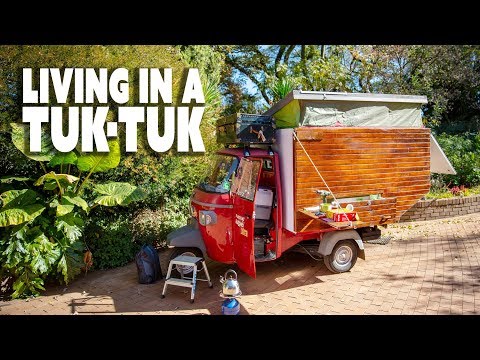