5 Tilting Uready e-Trike Rides Like a Jet Ski on Asphalt, If You're Up for It
Car video reviews:
Up Next

Up until now, EV manufacturer Arcimoto has made its mark on the market through its so-called FUVs (fun utility vehicles), which are small, electric three-wheelers suitable for both leisure time and business applications. Now the Oregon-based company adds another three-wheeled machine to its lineup, but this time is an e-trike with features “never before seen on a vehicle in this class”.
6 photos

Arcimoto’s FUVs have come a long way since they were introduced and they are getting smarter with each new model released. They are now being tested for driverless operations in the delivery industry, with the company constantly looking to expand its list of partners to help it grow. In fact, it's been no more than three days since it announced a new collaboration with Faction Technology, allowing the latter to use its FUV platform to develop the autonomous Faction D1 three-wheeler, which would be remotely teleoperated.

Now a different kind of three-wheeler has just been unveiled by the manufacturer and based on the first look, this one seems just as fun to ride. Arcimoto calls this one the “Mean Lean Machine” (MLM) and we have little information on it so far, although the company released a video with the trike in action, so you can check it out below this article.

All we know about the MLM is that it is also an electric vehicle that promises a range of more than 200 miles with auxiliary batteries. Its most notable feature is the patented tilting technology that the manufacturer touts as being world-class, which makes the vehicle handle turns better. Riders should be able to corner on the MLM in the same way they would on a regular bike, but with greater traction, more stability and better braking ability, as explained by Bob Mighell, Arcimoto Chief Tilting Officer.

Able to carry one or two people, the all-wheel-drive Mean Lean Machine comes with pedals and a pedal generator for stationary recharge of the battery and for speed control.

We have no info on this thing’s top speed, battery and motor specs, nor do we know how much Arcimoto plans to ask for it. The company does mention though that the MLM should hit the market in the fourth quarter of the year and is available to pre-order. We’ll be back with more details as soon as we get them. 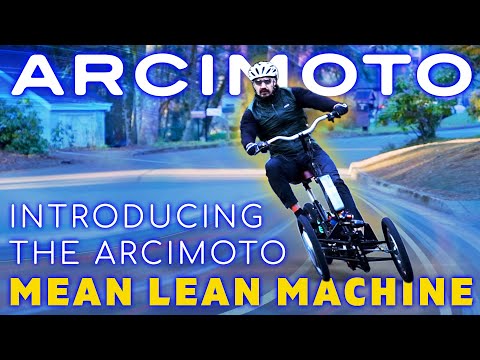