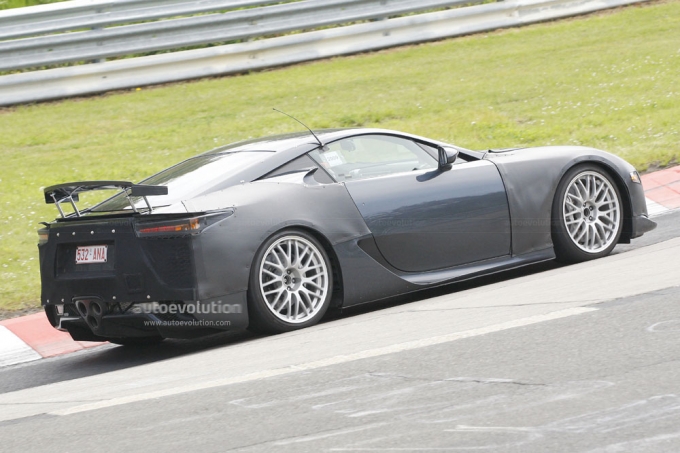 First shown at the 2007 North American International Auto Show, the Lexus LF-A might hit the market in the next few years as it is currently undergoing heavy testing on the Nurburgring circuit. However, no clear details have been released, with rumors indicating that the car will be powered by a 4.8-liter engine developing more than 500 horsepower.

Well, the guys over at autocar.co.uk talked with a company insider who confirmed that the car will indeed include a 4.8-liter V10 powerplant that would generate 550 horsepower and mated to a 6-speed semi-auto transmission. This translates into a maximum speed of more than 218 mph (350 km/h), faster than other supercars such as the GT-R and almost equivalent with Murcielago LP640 and Pagani Zonda F.

It seems like the car will share a different appearance from the ones we've seen in the spyshots, with the headlights and grille to be very different, the aforementioned source noted. Still unclear but it seems like Lexus will only launch the car as a limited series of 500 units, with a wide range of high-performance and aerodynamic options to be available as well.

The LF-A will not be even close to being affordable, as each model will be priced in between 140,000 and 190,000 pounds ($223,000 and $302,000). It might seem like the company is getting ready to debut the car this year, with production projected to start in the last months of 2009. As for the first public unveiling, the Tokyo Motor Show in October is likely to be the lucky event to host the official introduction of the car.