2 15 World Titles in One Picture: Hamilton and Rossi Swap Rides in Valencia

3 Think You Can Beat Lewis Hamilton on Track? Gran Turismo Sport Lets You Prove It

4 Extreme E Electric SUV Off-Road Racing Series Comes in 2021, to Be Based at Sea

5 Lewis Hamilton Will Be a Voice In Cars 3
Car video reviews:
Up Next

The six-time Formula One World Champion has announced the entry of his team, X44, into the upcoming Extreme E, a new off-road racing series with a very important spin.
22 photos

If the "E" in the title didn't give it away, then maybe the fact that all racing series these days seem to use electric vehicles must have done it. Indeed, participants in the Extreme E will drive identikit electric SUVs in various locations across the globe that have one thing in common apart from offering the kind of rough terrain that would make racing there interesting: they've all been affected, one way or another, by environmental changes.

Given the remote nature of the new championship's locations, the races will not have actual spectators, but they will be streamed live on TV. The five events scheduled for next year begin on January 23 in Dakar, Senegal. After that, the participants - who use a repurposed ship for transportation to lower the environmental impact - will travel to Saudi Arabia, France, Greenland, and Brazil.

The Extreme E races will take place over 10-mile-long (16 km) circuits designed in each of these locations, with each bout consisting of two laps in which the mixed teams (one male, one female driver) go head-to-head. The vehicles themselves are expected to pack 550 horsepower for a 0-62 mph (0-100 km/h) sprint of 4.5 seconds. With an overall weight of 1,650 kg (~3,600 lbs) and plenty of wheel travel, they should be able to provide a nice spectacle as they skip around the challenging terrain.

If you're mildly excited about the prospect of seeing Hamilton behind the wheel of a capable off-roader, don't be. The British F1 maestro will only take the role of team manager, though it's not clear at this time who will do the actual driving for team X44 (named after Hamilton's car number at Mercedes-AMG Petronas).

Hamilton has been vocal about racism in sport - and in Formula One, in particular - ever since the events in the US earlier this year erupted. His involvement with the Extreme E shows he's also invested in other important matters for the society. The list of sportsmen who are willing to take advantage of their position to get a message across is growing, with the latest example being Manchester United's forward Marcus Rashford who managed to prevent the termination of a program that was feeding poor children in the UK. 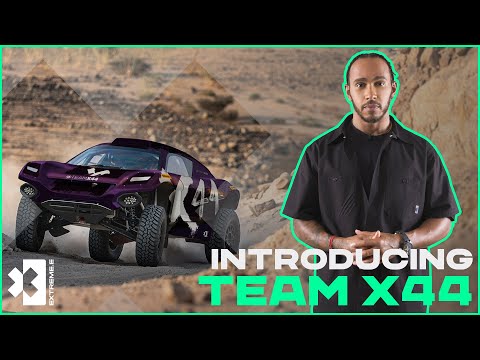