3 BMW M3 Vs. Alfa Romeo Giulia GTAm, One Looks Better, the Other Is Not Even Faster

Now that we finished wishing the most important people in our lives a ‘Happy New Year,’ it’s time to get back to work and bring you the latest and most exciting stories from the automotive world.
7 photos

And since car manufacturers have yet to officially open up for business, we’re going to take another look at the drag racing realm, in this story anyway, which brings together three different rides.

Boasting fresh looks, more refined oily bits, and being available with a stick shift and M-tuned xDrive all-wheel drive system, the new generation BMW M3 is fighting out of the white corner. You may not think of it as a drag racer, and for good reasons, because it can easily get smoked by some of the quickest vehicles out there, but the premium compact sports sedan doesn’t disappoint.

In the first run, where it met a Lincoln MKZ, it ran the quarter-mile in 11.95 seconds, with a 123.2 mph (198.3 kph) exit speed. Subsequently, it lined up at the start line next to a Dodge Challenger, completing the quarter-mile a bit quicker. The muscle car is believed to be in the Scatpack specification, meaning that it has 485 hp and 475 lb-ft (644 Nm) of torque available on tap, produced by its HEMI V8.

The MKZ, on the other hand, which was dropped in 2020 to make room for more crossovers, was offered with up to 350 hp and optional all-wheel drive.

Think you can spot the winner(s) just by looking at these specs? Probably, but you still won’t know for sure until you hit the play button on the video shared down below, so, without further ado, you know the drill. 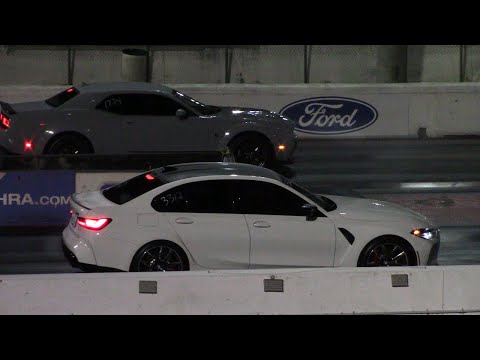