2 The Shape Superyacht Concept Has Gaping Hole in the Superstructure, Plenty of Attitude

It all starts with a dream. In this particular case, it starts with a concept, the visualization of an idea that could pave the way to something better.

When he’s not imagining outlandish super- and megayachts that defy all norms – and occasionally even common sense – Italian designer Pierpaolo Lazzarini of Lazzarini Design is thinking of ways in which real-world problems could be addressed or solved. As far as marine transportation is concerned, he has a very enticing idea for fleet operators.

He calls it the SeaJet, a hyper-fast vessel for marine transportation that would have real-life applications in passenger transportation. One assumes it could be used by private individuals as well: say, for example, as a larger tender to haul guests from the shore to the mothership, or the other way around, and which would be stored in the garage of the superyacht. However, it seems like its main purpose would be mass transit of some form. And it would be a highly efficient one, too.

The SeaJet is the latest entry in the series of the same name, which Lazzarini introduced a while back. It also includes the Xenos hyperyacht and the Jet Capsule, each targeting various segments of the market. The SeaJet is the mid-size model, with a total length of 23 meters (75.5 feet), while the Capsule is 10 meters (33 feet) long and Xenos 39 meters (128 feet). Versions of the Xenos can also render themselves viable for mass transit, but its sheer size could work against it in certain scenarios.

The SeaJet, on the other hand, would feel at home wherever it would be needed. Offering seating for 50 passengers, it is also modular, in that one unit can serve as a “wagon” with self-propulsion, part of a train-like ensemble. It’s no wonder, then, that Lazzarini describes it as a vessel with aircraft inspiration but train applications.

Powered by twin engines of 1,200 hp each, the SeaJet would be offered either as a V-hull boat or a hydrofoil with a jet engine. Maximum speed would be 69 knots for the hydrofoil version, which would also bring the benefit of a much smoother and stabler ride. Hydrofoil boats “soar” over the waterline when they reach certain speeds, which reduces water resistance and translates into higher speeds, improved performance and an overall more comfortable experience.

The interior of the SeaJet is not unlike a plane, albeit a much fancier one. You get two types of seating, in the manner of commercial and business classes on airlines, and transparent solar panels on the roof, which allow plenty of natural light but also offer shade on hot days. Lazzarini stops short of offering more details on the interior, but renders show an elegant, luxurious without being ostentatious, and comfortable interior. That said, one assumes at least two restrooms would be included in the layout.

As noted above, the SeaJet could become a train of the seas, thanks to the ability to link to other units. This would be done via the S.N.A.K.E. system, which stands for swivel neutral assisted kinetic enforcing and implies a homokinetic joint on each unit. These CV (common-velocity) joints would allow attaching one or more “wagons,” and they would travel synchronized. With each unit capable of carrying 50 passengers, one such SeaJet train could move a lot of people in a very short timeframe, which would make it quick, efficient and, just as importantly, comfortable.

One version of the much-larger and luxurious Xenos that Lazzarini imagined for passenger transport included extra safety measures for the uncertain times we’re living. No one wants to spend too much time cooped up with strangers, let alone 49 of them (or 179, in the case of the Xenos), so this boat of the future would have thermal scanners, air sanitation recycling system, and illumination by UV-C/UV-V germicidal lamps. The newly-introduced SeaJet could benefit from those, as well.

Here’s the SeaJet, dreaming of a more comfortable and efficient means of passenger transportation on water. 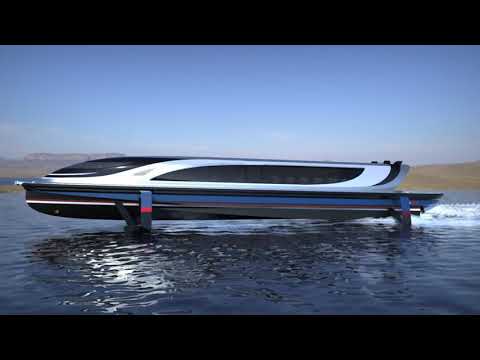