4 Is the Rivian R1T Truck Worth It? Amazon Seems to Think So

5 Rivian R1T Looks Majestic in High Speed and Rock Crawling Runs in the Desert
Car video reviews:
Up Next

We almost lost count of all the electric pickup trucks that have been teased, promised, previewed, or merely hinted at. Given how many trucks U.S. customers buy, it's almost surprising it took manufacturers so long to make this step.
21 photos

Things would have definitely happened quicker, but the technology wasn't ready for it. A pickup truck needs to strike a very delicate balance between its own weight, maximum towing weight, and a decent enough range. Focus too much on one aspect, and one or both of the others might suffer a penalty.

Now, though, you have Tesla and its Cybertruck; you have GMC and its Hummer revival; you have Bollinger and its B2 boxy truck; you have Ford talking of an all-electric F-150; you have Nikola with its gorgeous-looking (though a bit undecided) Badger; you have the promising Lordstown Endurance; finally, you have the Rivian R1T with its working prototypes and near-complete production plant. Did we miss anyone?

The Illinois-based manufacturer has repurposed an old Mitsubishi plant in Normal and has now released a video touring the facility and showing how far along it has come. Clearly, there's still plenty of work to do, but unlike other would-be competitors, Rivian is clearly on the right path to start producing the R1T next June.

A lot needs to be sorted out, though. For instance, the whole body manufacturing line is still missing and should be installed this autumn. The general assembly line is also a work in progress with 500 robots waiting to have their positions assigned and begin work.

The factory walkthrough catches a few interesting bits. There's the truck's subframe and battery pack coming together, as well as a close-up of its drivetrain. A few good seconds are also spent talking about the plastic containers the factory receives its part in which are apparently made out of ocean plastic and are fully recyclable. Neat.

Power comes from four electric motors each with an output of 147 kW (200 hp). The combined value of the four motors can be adjusted to anything between 300 kW (407 hp) to 562 kW (764 hp). Towing capacity is rated at 11,000 lbs (5,000 kg) while the final price should be communicated closer to its June 2021 launch. However, Rivian aims to be competitive compared to Tesla, so expect the initial price of $69,000 to drop, though its design alone should be enough to steer a lot of more conservative buyers away from Tesla's offering. 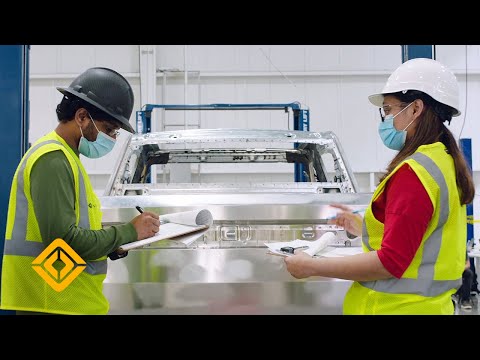