4 Supercars Handled with Gaming Console Controllers Are a Neat Trick

After watching this drag race, Mercedes-AMG is going to stop printing ads for the GT R and might even demote it to an AMG-Line model. I mean, every other AMG model with a V8 wins drag races in 2018. We're just kidding, but we honestly expected it to be faster than the Lamborghini Huracan.
2 photos

You've got an Italian supercar with a 5.2-liter, 610 horsepower V10 engine against a German coupe with two fewer powered wheels and a 4.0-liter V8. So if you look at it like that, the Huracan should win. But after seeing enough drag races of the AMG GT R, we know that it's a real dark horse.

You might think that the GT R is not a supercar, but we disagree. Yes, the engine is shared with sedans and stuff, but it sits behind the front axle, so this is still a mid-engined car... technically.

Also, the gearbox is at the back for better weight balance, and we just love the way it looks. That Panamericana grille looks bolder here than on any other AMG model, being backed up by huge side air intakes and a trunk-mounted wing which came from the factory, unlike the Huracan.

Seeing the Lambo with a fixed wing immediatly makes you think it's the Performante. But it's not. We're dealing with the regular LP610-4 fitted with an aftermarket aero from 1016 industries, an American company. Yes, it looks cool, but it doesn't make the car any faster.

Regarding price, these bad boys are quite close. While the GT R starts at under $160,000, with options and a dealer markup, it usually costs $200,000. That's still cheaper than the Huracan, but not by much.

Maybe we shouldn't be talking in dollars, as this drag race is on a British drag strip. They do three separate attempts, which the Huracan wins easily due to its superior launches. But because the German V8 engine is twin-turbocharged, it wins the rolling races. 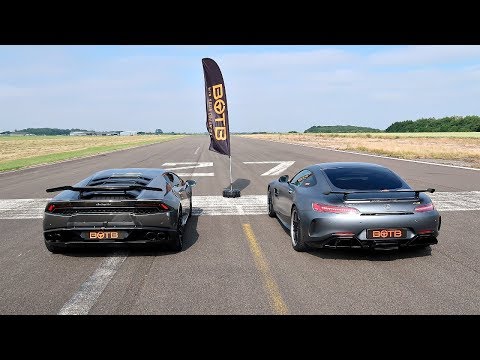