4 Update: Mystery Koenigsegg Spotted in Sweden, Could Be the Regera "Megacar"

Koenigsegg sure knew how to tease us ahead of their big unveiling of the new models planned for Geneva. After showing all sorts of hints here and there, like some lettering and even a small drawing that pointed to a new wing, the Agera RS is now on display at the Swedish company’s stand and getting ready to welcome its first visitors.
4 photos

The guys from Zero2Turbo managed to snap some photos before the show kicked off and we can now confirm that our suppositions about this model having a new wing at the back were true.

Just like it looked in the photos, the RS has a new profile at the back, probably for some added downforce. If you will, this car could be as different from the Agera R as the McLaren 675LT is from the 650S.

Therefore, we also expect a small bump in power, not that the Agera R had any issues in this department with its 5-liter twin-turbo V8 making 1,140 HP and 1,200 Nm (885 lb-ft) of torque but is more is possible, why not offer it?

Don’t expect a dramatic increase, however. The focus might be more on aerodynamics and lightweight construction than on straight up power, as suggested by the new front bumper and its splitters as well as the side skirts on the sides, all of the new bits being highlighted with orange.

There are just a couple of hours left until the show will commence and we’ll learn all the interesting details about not only the Agera RS but also the brand new Regera that will surely have a plug-in hybrid layout.

UPDATE: we just found a video of the car as well and posted it below. 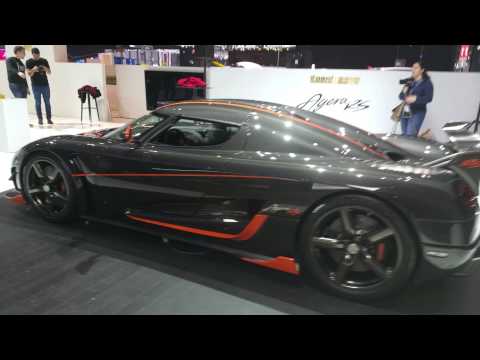