Mihnea Radu
The Mustang GT350 is a competent piece of American V8 technology, but people don't expect it to keep up with an Italian supercar. But Ferrari was even more of a dominant force in the road racing scene back in the 1950s, yet this custom-built roadster managed to put up a fight and became an underdog hero in the process.

Road racing was the thing to do in the 1950s. NASCAR was young, so if you wanted to make a name for yourself, you had to do it on the road. Imports like Maserati and Ferrari dominated the scene in America, with a few British lightweights occasionally challenging them.

American hot-rodder Max Balchowsky and his Old Yeller II are part of road racing folklore, and we relished the opportunity to see Jay Leno sample this classic. The builder made nine of these race cars in total, but it was number II that's the most famous and valuable.

Like many returning home after the war, self-taught engineer Balchowsky developed a passion for speed. He'd made a name for himself in the California race meet scene with a 32 Ford powered by a 310-hp Buick engine, and in 1959, work began on the car before us.

Perhaps the most interesting element of this formula is the 1959 Buick Nailhead V8. This 401 cubic-inch (6.57L) powertrain was never known for sports car applications. However, Balchowsky valued two things about it: torque and price.

The car was affectionally known as the "Backyard Special" or "The Junkyard Dog" because it was such an eclectic mixture of parts. You can easily spot the six Stromberg 97 carburetors with a special Edelbrock intake in Leno's video. It had suspension mixing Jaguar and Pontiac arms, a steering rack from a Morris Minor, GM 16-inch wheels with tires from a Chrysler station wagon, and a large Studebaker truck radiator. As for the yellow paint, this is Golden Rod from Ford's trucks.

Its current owner Ernie Nagamatsu purchased it in 1990 and continues to put it to good use on the track. It's covered in little bruises, which only add to its appeal. 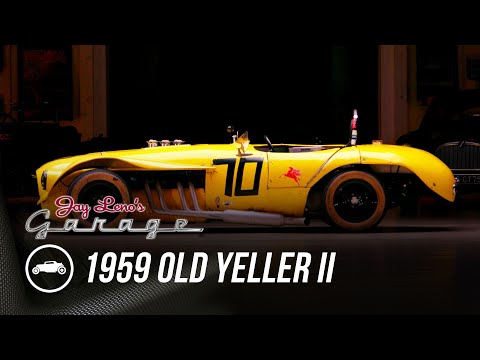