Buick planned on launching the refreshed Enclave in 2020, but the pandemic situation forced the American carmaker to delay that to the summer of 2021 as a 2022 model year.

The carmaker kept its promise to offer a premium vehicle at a bargain price compared to the European competitors. That didn't mean that it lowered the quality of its features. Buick built it smarter. It shared its platform with the Chevrolet Traverse and GMC Acadia. It's like getting to KFC, ask for two buckets, and then split it in three. But the Enclave was more of a Red Lobster meal than a chicken and threatened its main competitors with a seven-seat interior packed with more technologies.

On the outside, the design team worked harder at the SUV's front fascia. It reshaped the grille and improved the headlights. Buick's engineers helped with the automatic high-beam feature. The Enclave kept the same wave-shaped sculptured doors and fenders and revealed new light-alloy wheels on its sides. At the back, the biggest SUV from Buick's lineup sported redesigned taillights, with a straight chromed slat connecting them over the tailgate.

Inside, the carmaker offered an infotainment unit with standard wireless Apple CarPlay and Android Auto. A new trim level, named Avenir, pampered its seven occupants with a leather-clad interior, two sunroofs, and massage for the front heated and ventilated front seats.

Under the hood, the carmaker installed an enhanced 3.6-liter V-6 powerplant that produced 210 hp and was paired with a nine-speed automatic gearbox. The all-wheel-drive system was available but not standard. 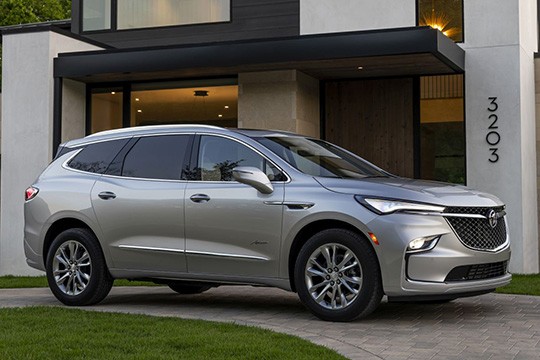