Buick completely redesigned the Envision for the 2021 model, and it looked more Mazdesque than any other car from its lineup.

But that was not a bad thing.

The biggest market for Buick was the Chinese market. With that said, the design team had to make a car appealing for them, more than for the North-American market. The Asian design style was also appealing for Buick's home market, so designing a vehicle with those lines shouldn't be a problem.

Gone were the "eagle-eye" headlights on the 2021 model year for the Envision. The designers installed a new pair with cues that resembled those found in the Opel/Vauxhall Insignia. The grille lost the vertical slats in favor of the horizontal ones. Its overall look seemed to be like a new generation of the Opel/Vauxhall Captiva – Chevrolet/Holden Antara, which never made it in Europe since the German brand was sold to the PSA (Peugeot-Citroen group).

The car's interior featured a modern design, with a minimalist look for the dashboard. The horizontal layout for the 10" touch-screen infotainment unit tilted toward the driver brought a new design era for Buick. Under the screen, horizontally mounted vents divided the look between the dashboard and the center console. The sporty seats installed for the front passengers enhanced the car's sportier character.

At the time of its launch, the Buick Envision featured an engine carried over from its predecessor: a 2.0-liter turbocharged unit that developed 252 hp. It was paired as standard to a 9-speed automatic gearbox. The Envision was available with either front- or all-wheel-drive. 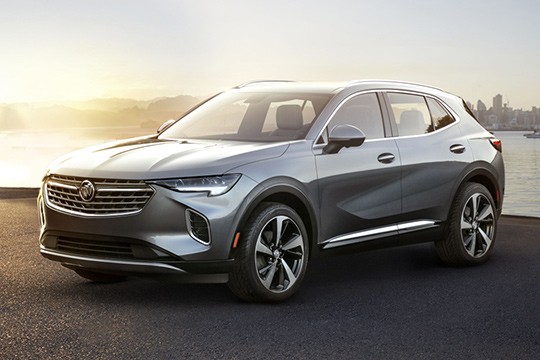