Regular Car Reviews: The Certified Craziest (and Maybe the Best) Car Show on the Internet

Innocent-Looking Hatch Is Perfect Sleeper Thanks to Big Turbo, Loads of Mods

Getting a hatchback with 280 horsepower on tap is enough for most people, but what if you want a bit more? Well, instead of changing it for next year's model, you can “invest” in it and then take it as far as your bank account allows it. How far? Well, what about nearly double than stock?
6 photos

This imaginary dialogue probably did not happen, but if it did, the customer drove off in a Seat Leon Cupra with a claimed 520 metric horsepower (512 hp) and 600 Nm (442.5 lb-ft) on tap. The stock model offered 280 HP (metric) and 350 Nm, so this is quite a massive difference.

Thanks to the upgrades, the claimed top speed has increased from 250 kph (155 mph) to 300 kph (186 mph), which is more than you are legally allowed to drive anywhere in the world, except for a few sections of the Autobahn.

Yes, you guessed it, this video was filmed in Germany, and the folks over at Auto Top NL went ahead and served this tuned Leon a large portion of beans. As you can imagine, if you want to nearly double the power of a motor, you need to throw money at it like there's no tomorrow and install numerous uprated parts while you are at it.

The owner of this particular vehicle chose KolbenKraft tuning to install an LM440 upgraded turbocharger, an R600 airbox, a 100-cell catalytic converter, an L-Performance exhaust that has 3-inch piping, and a CTS intercooler.

We should underline the fact that the CJXA/CJXB EA888 2.0 TSI unit found under the hood of this Spanish hatchback has been rebuilt with stronger pistons and rods, but other internals might have been changed in the process as well.

Many tuners refrain from delivering the full "recipe," but it is worth noting that the software to make this engine run as it does was done by MR-Chiptech.

The coolest bit about the entire build is the fact that nothing gives it away as you look at it, and its exhaust is relatively silent for that amount of power. Well, that part is exactly what we like about it. Some of us might even go further and remove the badges on the body just for fun. 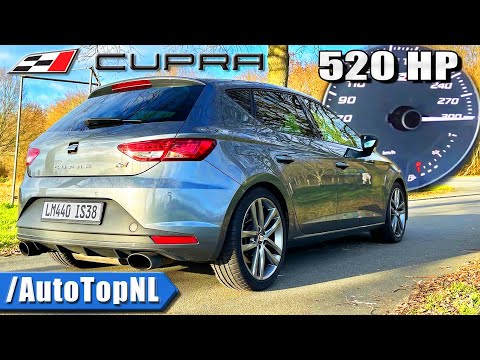