In just a few years, Hyundai has managed to reshuffle its lineup and enhance it with some sporty models. One of them is the i30 N, which has allowed the Korean company to rival the likes of other front-wheel drive compact hot hatchbacks, and it’s this one that recently proved its mettle at the Nurburgring.
10 photos

SportAuto put Christian Gebhardt in the driver’s seat of the i30 N Performance, which was then driven as fast as possible on the German racetrack, in the Nordschleife configuration. When the imaginary chequered flag dropped, it posted a lap time of 8 minutes and 05.19 seconds.

That’s not exactly record-breaking, because it’s the Mercedes-AMG GT Black Series that beat every other production car out there, so it still holds the crown, with 6:43.62. It’s followed by the Lamborghini Aventador SVJ, which did it in 6:44.97.

Taking a closer look on FastestLaps reveals that the i30 N actually beat the all-wheel drive Ford Focus RS, part of the previous generation, which did 8:06.00 with Gebhardt behind the wheel. It was also faster than the 987-generation of the Porsche Cayman S, which posted a lap time identical to that of the Blue Oval’s hot hatch. Further up the chart sit the BMW M3 E92 and Ferrari 575M Maranello, with 8:05.00, and the MINI JCW GP and old Mercedes-AMG A 45, which completed the course in 8:04.00 each, identical to the Lamborghini Diablo GT, and VW Golf R Mk7. 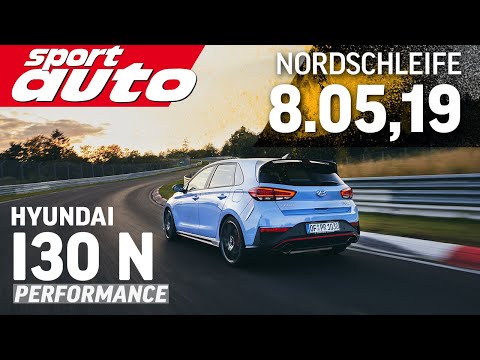