3 How Does the 2021 Volkswagen Golf GTI Compare to the Iconic Mk5 GTI?

5 Here Are the 3 Most Powerful European Hot Hatches of 2020
Car video reviews:
Up Next

The poor man's sports cars or the family man's blow-off valve - you can think of the hot hatch segment in any way you want but people will continue to buy them because they're a rare mix of practicality, performance, and good value for money.
9 photos

The debate over which model is the best in the niche will probably continue for as long as we'll have more than two models to choose from, and given the very wide variety available now, the rivalry is fiercer than ever. Just like politics and sports, everyone will have their own opinion and will defend it till kingdom come.

There was a time when the three main competitors were the Volkswagen Golf GTI, the Ford Focus ST, and the Renault Megane RS. At times, Honda would produce Civic Type-R that was good enough to make the cut, but for the most part, the battle was waged between these three.

Well, it's 2021 now and it looks like at least two of them have survived at the top, though the rest of the lineup looks completely different. Instead of their French rival, the GTI and ST now have to compete against the South Korean newcomer, the Hyundai i30 N, and the German intruder, the Mercedes-AMG A 35.

Starting with the latter, it immediately stands out as the odd one. Not only is it way more expensive than the rest, but it's also ahead on power. Add the all-wheel-drive system to the list, and it's obvious it plays in a different league. Of course, you get what you pay for: a classy cabin and a premium feel all around, as well as one of the coolest two-liter engines out there, albeit in a de-tuned form with "just" 306 hp.

The Hyundai i30 N, on the other hand, sits at the other end of the spectrum in terms of price, which makes its performance all the more impressive. The Korean hatch packs 280 hp and lets everyone know about it through the loudest exhaust system in the test, yet there is one thing that lets it down: its tires. The Pirelli P-Zeroes once again confirm they're not the best choice you can make when looking for performance, particularly when the road surface is soaking wet.

Meanwhile, The Golf GTI and Focus ST, though not unchanged, continue to excel at the same things as before: the former is the all-rounder and the best daily driver (except the very expensive A 35), while the ST provides the best handling among all four, making it the preferred driver's car. Click play below to see each performs on a wet track and hear Rory Reid give his verdict. 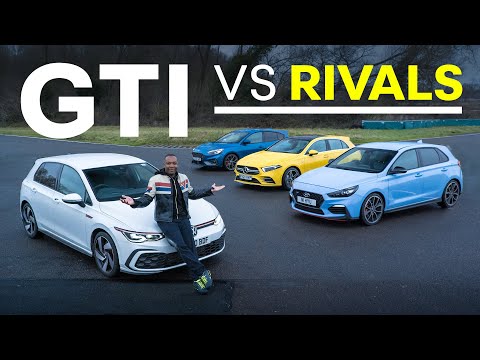