3 Here's What the VW Golf GTI Mk.8 Will Look Like

How Does the 2021 Volkswagen Golf GTI Compare to the Iconic Mk5 GTI?

While the all-new 2021 Volkswagen Golf GTI traces its roots to the Mk1 model of the 1970s, its existence is owed almost entirely to the Mk5 GTI. About 16 years ago, this Tic Tac-shaped hatchback turned acronyms like TSI and DSG into household names, and the main ingredients to this formula remain unchanged today.
5 photos

However, as one of the most refined go-fast compacts, the Mk8 GTI is obviously different from the Mk5. And this comparison from CarGurus UK is perfect if you want to judge the generation gap. According to the presenter, you can now get one of these old-timers for a tenth of what the 2021 model costs.

But this one looks super-immaculate and thus way more expensive. There's not a cracked piece of plastic or worn piece of leather in sight. Also, the original wheels and suspension are still in place, which is rare in the GTI community. But anyway, styling has moved on significantly.

Both models are understated, especially when you consider what a Honda Civic Type R looks like. However, the 2021 Golf GTI is a member of the oversized black grille club. Thanks to a brow that connects the headlights, the modern car looks a bit angry, especially when placed alongside its bubbly ancestor.

But under the hood, the two have a lot in common, as they feature 2.0-liter turbocharged four-bangers. And even though they are three generations apart, the output gap is only 45 horsepower. On paper, the new model is almost one second quicker to 62 mph (100 kph), which is actually due more to the increased torque and launch system than the power.

The cosmetic differences are better felt on the inside, where it's like comparing an iPad to a CD player. For those of you who don't know, we used to carry our music on 5-inch pieces of silver plastic back in the day. It was a real pain, but seeing the retro interior of the Mk5 GTI actually triggers a heavy dose of nostalgia. By comparison, the 8th-gen hot hatch features modern twin screens and a tiny DSG shifter that looks like it's been plucked out of a Porsche. So which would you have? 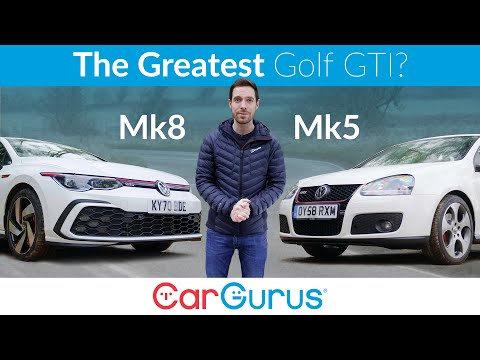