1 Hamilton Focuses on E Performance, Switches the Mercedes-AMG Project One to R+

A few years ago, Mercedes-AMG decided to split its performance compacts into two groups. The A45 S and its brothers were free to be as powerful as possible, pushing past 400 horsepower, while the new A35 family went after "budget" rivals like the Golf R with a 302 horsepower (306 PS) engine.
6 photos

Of course, both batches of cars would still have 2.0-liter turbo engines, and we often wondered what the performance gap between them is like. Today, we get to find out, thanks to a drag race between the above-mentioned hatchbacks. But there's a bit of explaining to do before the Play button is pressed.

Mercedes doesn't sell the A-Class hatchback in America, just the sedan model, which does come in A35 flavor. And while the outcome of this race could be extrapolated to the GLA and CLA family, we'd like to point out that the A45 S type of powertrain, which makes 415 hp (421 PS) thanks to a hand-built AMG 2.0-liter, isn't available Stateside. Instead, the regular GLA 45 and CLA 45 just have 382 horsepower engines.

Cosmetically, the two hot hatchbacks in this drag race have very similar looks thanks to the yellow paint and add-on aero packages. The only features that set them apart are the shape of the grille, the color of the brakes, and the number of exhaust tips. If you're now wondering if the A45 S is worth all that extra cash, you'll just have to watch the drag race.

With over 100 horsepower more and a more advanced AWD system, the S-badged model makes quick work of its little brother. There's over a second between their quarter-mile times, and it's a similar story in the rolling race. The A45 S is so quick that we doubt a stock hatchback with a 2.0-liter engine will ever be quicker. But that doesn't necessarily mean it's worth the extra money. What do you think? 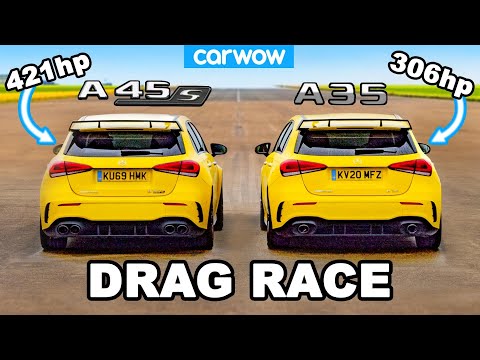