3 Gesture-Controlled Systems a Nightmare to Use, Rear-View Cameras a Must-Have, Study Shows

Mircea Panait
i30 N is Hyundai’s first genuine foray into performance cars. But as opposed to Volkswagen, Renault, and Ford, the automaker from South Korea doesn’t actually care about zero to 60 times and Nurburgring times.
14 photos

Albert Biermann, the former big kahuna at BMW M and current boss of Hyundai N, made it very clear that his degree of freedom at Hyundai is much higher. As for his former employer, Biermann let it slip that the M in BMW M now stands for marketing rather than motorsport because the Bavarian automaker can’t help but slap that badge on undeserving vehicles.

With these shots fired, it’s also worth highlighting that driving pleasure and the emotional impact of driving the vehicle close to its limit is what sets the i30 N apart from the Golf GTI, Megane RS, and Focus ST. Be that as it may, the front-driven hatchback is properly quick in a straight line as well.

It wasn’t easy to extract these figures, though. Scott played a lot with the launch control settings to eliminate wheel spin and hook up as neatly as possible on the rubber-infused surface. On the final and quickest attempt, he set up the launch control to 2,500 rpm, the lowest it can go. Considering that only a couple of FWD hot hatchbacks are capable of dipping into the 5.6- and 5.5-second bracket, the facelifted i30 N is all the more impressive. 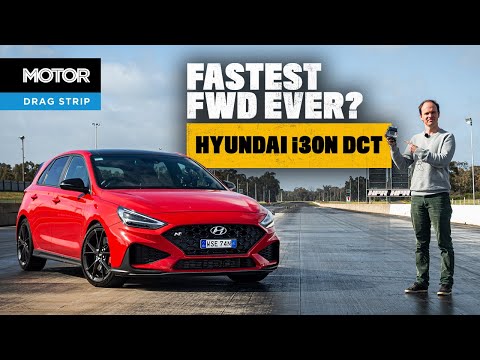