1 Cyclocar, a Fully-Fledged Flying Car, Comes With All-Electric Drivetrain in 2022

2 NFT Unveils the Aska eVTOL Aircraft, First Units Will Be Delivered in 2026

3 The Future Is Here: UPS Buys eVTOLs for Delivery Operations

4 Flying Car Does Fit Inside a C-130J Super Hercules, Air Force Proved It

Defiant X Weapons System in the Works, Helo to Replace Black Hawk in the 2030s

Hunter Kowald Is Flying All Over LA in His Custom, Production-Ready Hoverboard

Man can’t fly on his own, but aircraft can help replicate what that feeling must be like. In terms of personal aviation systems, the closest we got is the jetpack / jet suit, with the likes of Richard Browning and Frank Zapata being the most famous inventors.
9 photos

There are many downsides to this type of Iron Man suits, as jetpacks are occasionally referred to. They include the short flight time, the massive fuel consumption, some stability issues and, last but not least, the eye-watering price for such a unit. So, while they’re still deemed a viable alternative for personal aviation systems, they’re far from an every man’s type of gadget.

Not so with the Hoverboard from Los Angeles-based digital creator Hunter Kowald. After years of experiments and explosive fails, Kowald was finally able to publicly unveil his creation to the world and he did so in the best manner possible: by flying it.

The Hoverboard is like a giant drone with downward-facing propellers, with a custom carbon fiber structure tested for durability and strength, operated via a handheld remote. It can carry a payload of up to 500 pounds (227 kg) for a total weight of 750 pounds (340 kg), which makes it perfect for carrying a human operator on top, and comes with several redundancies for safety. For instance, it can still land safely after two of its motors have failed, or one of its five power systems.

“In an emergency, propeller rotation is capable of breaking the speed of sound and sustain supersonic, to compensate forces lost,” Kowald says. FAA aircraft navigation lighting is included, and all components are custom made of industrial-grade equipment.

Since the big unveil this week, Kowald has been flying the Hoverboard all over Los Angeles, including in traffic – which is probably not exactly legal, but that’s another story. At least he stopped at the red light, as one of the videos below shows.

For the time being, these are all the details available on the Hoverboard. Kowald tells his supporters on social media that flight time with it is upwards of 20 minutes and that he’s making “more” of these, so it looks like this is the production-ready model. He’s mum on questions pertaining to price or ability to invest in further development, but he does say more is to come.

And it’s bound to be exciting. 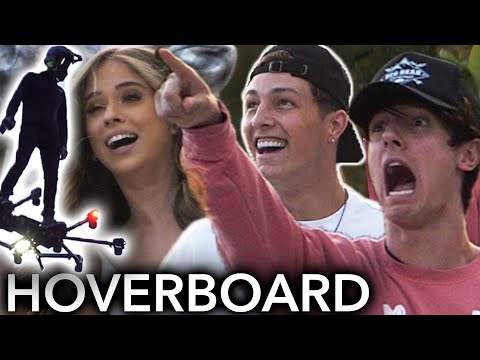