1 Honda Has a Clever New Suspension System, It Uses Electromagnets

4 ZF Demonstrates Pre-Crash External Airbag, Will Turn Your Car Into a Pufferfish

With a front wheel steering angle of up to 80 degrees and a simple, cost-effective setup, ZF’s latest front axle concept is set to make parallel parking a breeze.
7 photos

Finding a free parking spot in today’s bustling cities can be an arduous quest. When you do manage to find one, the universe usually conspires against you offering a tight space between two vehicles that leaves no room for error. Oftentimes, you’re forced to channel your inner engineer and estimate the optimum trajectory with impatient drivers honking and yelling out profanities behind you.

For decades, automakers have attempted to make things easier for those of us who have to deal with the aforementioned situation on a daily basis. So far, technologies like all-wheel steering or automated parking have made it to mass-produced vehicles. Although these systems managed to simplify tasks like parallel parking, their complexity makes them expensive to implement, so currently, only select higher-end models offer them.

Fortunately, that could soon change thanks to engineering giants ZF. At the forefront of automotive innovation for years, the German company has recently showcased a new, cost-effective suspension concept that aims to radically improve low-speed maneuverability and cure parallel parking anxiety.

Dubbed EasyTurn, the novel system will enable the front wheels to pivot up to 80 degrees instead of the 35 degrees that the vast majority of current setups allow.

This is made possible by an extra suspension link mounted roughly parallel to each front wheel. In today’s standard front axles, the knuckles are directly connected to the lower control arms while tie rods connect them to the steering rack via tie rods. In the case of the EasyTurn concept, the tie rods are shorter and connect to the extra links on each side. In turn, the links are coupled with the lower control arms and connect to the knuckles via stabilizer rods. This simple yet extremely clever setup drastically improves the front wheels’ ability to turn in either direction. The best part: adding a couple of links to the front suspension won’t drive up manufacturing costs so, in theory, EasyTurn can be implemented on cheaper vehicles.

I say “in theory” because, in its current form, the concept presents several packaging hurdles that will take some development to overcome. The design obviously requires ample wheel well room so that the wheels can pivot freely. This space is usually taken up by crash-structure frame rails, which will take a lot of ingenuity to redesign, especially in front-engine, front-wheel-drive vehicles with transverse-mounted units. In addition, another serious hurdle for FWD vehicles is the lack of constant-velocity joints capable of delivering drive torque at such an extreme angle.

That being said, ZF managed to successfully implement and test the system on a BMW i3 that’s powered by a rear-mounted electric motor. In the short video below posted on YouTube by Guntram Fiala, you can see footage of the EasyTurn system going through real-world tests. It may take some time to get used to seeing the front wheels pivot like that, but the result is fascinating.

The company states that EasyTurn can be a viable solution for electric vehicles with either rear- or wheel hub-mounted motors right now. Furthermore, the development will continue with the hopes that the axle design will also become compatible with front-engine, ICE-powered cars.

Current implementation hurdles aside, ZF’s EasyTurn is unquestionably one of the most intriguing suspension concepts that we have seen in recent years. We can only hope that the engineers behind this ambitious project will manage to overcome its limitations and develop a version that will make it into mass-produced vehicles in the not-so-distant future. 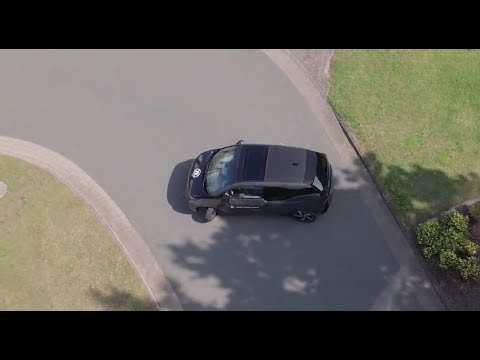