1 Cyber Rodeo: Tesla Is Getting Better at Organizing Events, Making Cars Next?

The only reason that Elon Musk called the Giga Texas opening ceremony a “Cyber Rodeo” was because the Cybertruck was the highlight of the show. Despite that, the show was more about rodeo than the Cybertruck, but even so, there were a few surprises on the Giga Austin factory floor.
7 photos

Tesla Cybertruck has become almost a myth, something that believers say exists but nobody ever saw it in the wild. Well, almost, as there were plenty of prototypes, starting with the one with smashed windows during the initial presentation. But the fact that the Cybertruck went so many times back to the drawing board led to more delays and was also caused by delays. It’s hard to break the circle.

The thing is, the long development cycle of Tesla’s electric truck allowed competitors to come up with some clever pieces of engineering on their already launched vehicles. This happened when Rivian brought the R1T into the market with a four-motor configuration – Musk announced the Cybertruck will scrap the one-motor version and will go for 2-,3-, and 4-motor configurations. But this led to more delays.

Soon, General Motors announced the GMC Hummer with an interesting “Crab Mode” and that again spoiled all the fun for Elon Musk and his team. It was only natural the Cybertruck could not possibly come without this feature and bang! more delays for the Cybertruck. This makes us believe that, for once, Tesla never put much thought into the Cybertruck, beyond the odd shape and the cool name.

As a second take, it made launching the Cybertruck an elusive target, being constantly pushed away. Every time another electric truck brings a new, fresh perspective, Elon Musk must be like a child saying “I want that” when he sees a new toy. To give him a little credit, the Cybertruck shows some progress, despite some quality problems with the door of the prototype on show at Cyber Rodeo.

We’ve been covering some of the updates spotted on the newest Cybertruck prototypes, but there’s something else to it. A new video shared on Cybertruck Owners Club forum shows that the Cybertruck learned a new trick that has to do with – you guessed it – all-wheel steering. It’s not tank turn and not even crab walk, but it’s good news nevertheless, as it makes the huge truck easier to maneuver in tight spaces.

This comes four months after Elon Musk announced the rear-wheel steering feature in a Twitter post. The fact that the post was in reply to a fan pointing to Rivian and its tank turn is less important. We can tell by the short time it took Tesla to implement the all-wheel steering that Cybertruck development has been fast-tracked. It might be possible after all to see the electric pickup truck entering production sometime next year. 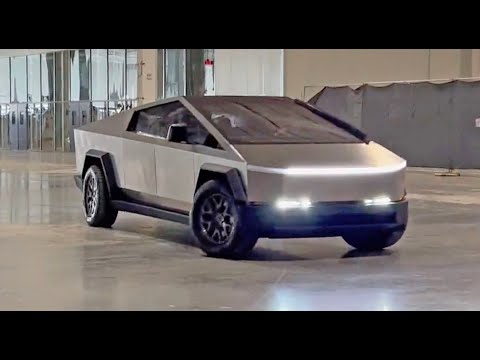