1 Taylor Swift Is the Real “Climate Criminal” With Her Private Jet Use, New Research Shows

Lest anyone forgets it, Floyd Mayweather is rich. He’s not just rich; he’s rich-rich: dripping in diamonds and couture, flying around the world in his private jet, and showing off his impressive car collection whichever chance he gets.
11 photos

But if there’s a chance you could possibly forget that, Floyd Mayweather won’t allow it. So, for his latest chat via Zoom with TMZ Sports, on the occasion of a possible, rumored match against Conor McGregor, TBE (aka The Best Ever) brought along a case of some of his most valuable watches. He doesn’t put a specific figure on it, but it’s worth way over $20 million.

You can see that part of the interview in the video below. Mayweather has never shied away from showing off his wealth, and this is a perfect example in this sense: asked if he could show the interviewer a watch, he asks for a price range first. His first display unit is a Rainbow Tourbillon in yellow gold and rainbow diamonds, priced in the ballpark of $2 million.

And that’s not even the most expensive timepiece he carries along. That would be his jewel crown, the Jacob & Co. one-off Billionaire Watch, which he bought in the summer of 2018 for a whopping $18 million and that he brings out whenever he tries to shut his haters up. He does the same now, waxing poetic about how those who say he’s broke are haters because “that’s what people want to see.”

“It’s not cheap to fly around the world in a private jet,” he laughs. “Imma continue to be successful, continue to build generational wealth and continue to take care of my family because that's what it's really about.”

Well, that and diamond watches that are unlike any other in the world. Like the Billionaire Watch: presented to the world in 2015 but in Mayweather’s possession since 2018, it’s a massive timepiece that includes 260 carats worth of emerald-cut baguette diamonds (239 diamonds in total), set in 18-carat white gold. The rectangular dial, also made of white gold, shows the skeletonized movement within, with the tourbillon escapement.

Mayweather stops short at just two watches for this interview, but he says the case is loaded with eye-catching units. On his return back to the U.S., it will include one more, since he made a stop at luxury watch retailer Pegasus Tokyo, walking out with a brand new Audemars Piguet. He paid for it in cash because, of course, he could. 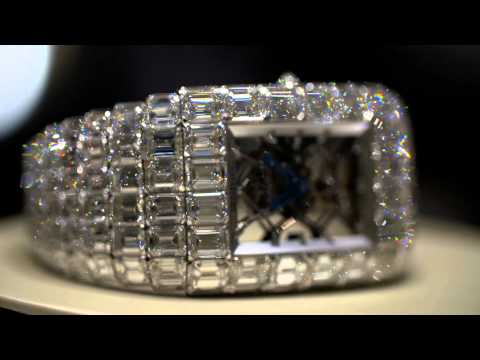 Editor's note: Photos in the gallery show the Billionaire Watch and the more "affordable" version, the Millionnaire Watch, both by Jacob & Co.