2 Internet Detective Figures Out the Location of GTA 6

Home > News > Videogames
Bogdan Popa
Take-Two has already confirmed Grand Theft Auto V is still selling like hotcakes even 8 years after its official launch, so it’s no wonder the company isn’t necessarily in a rush to bring us the next iteration of the game.
1 photo
And to be honest, it looks like most of the GTA V players don’t bother at all, as they still seem to have enormous fun with the current version of the game anyway.

It’s all thanks to the continuously increasing number of mods that sometimes completely transform GTA V into an entirely new game that some people might have a hard time recognizing.

A video published on YouTube channel Whos Chaos is just the living proof in this regard, as what you see here is actually GTA V with every new mod, including custom cars, God Mode, and new characters such as Shrek, Spiderman, and SpongeBob.

While we won’t comment too much on what you can see if you click the play button below, the video shows a different meaning of chaos (without the dedicated chaos mod in the first place), with the gamer himself claiming “I feel like I’m playing GTA re-released.” Indeed, it all looks like a completely different game, though the main purpose this time seems to just unleash the anarchy on the streets of Los Santos.

On the other hand, if you’re waiting for GTA VI, you’d better don’t expect any big news in this regard anytime soon. Rockstar is unlikely to launch the game until late 2023, according to a tipster, and it’s really no wonder the company just wants to wait for as long as possible.

GTA V is still a major hit, and the upcoming new-gen versions landing on the PlayStation 5 and the Xbox Series X|S due in the fall of the year are projected to breathe new life into a game that will probably stick around for many more years.

Discretion is advised: the video contains material that may be considered obscene. 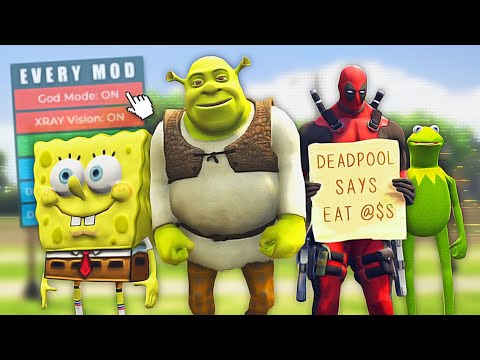