Former Playmate Drives a Lexus IS 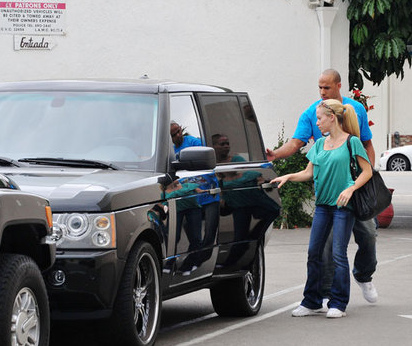 After she was featured on the E! reality television series ‘The Girls Next Door’, which followed the lives of Hugh Hefner’s girlfriends, Kendra Wilkinson moved out the Playboy Mansion in 2009 to start filming her own reality show called ‘Kendra’.

The show is following her and her future husband Hank Baskett, in Kendra’s new life after the Playboy period.

That is how celebritycarsblog.com found out that Kendra is driving a Lexus IS, while the Philadelphia Eagles receiver pilots a Range Rover HSE.

Well, that is a bit serious for her, considering the other two of Hefner’s girflriends are driving cars with a more sporty look. Let’s take for example Bridget Marquardt, who recently said she got a Porsche Cayman S, after selling her Mercedes on eBay.

But some things are going to change in Kendra and Hank’s garage, since the couple recently confirmed they are expecting a baby, which, according to Wilkinson, is due on Christmas Day. It’s not hard to guess who the godfather will be: no other than Playboy mogul, Hugh Hefner.

But first thing first. Before the baby arrives, Kendra has to some last-minute wedding preparations, as the big event is scheduled to take place at the Playboy Mansion on June 27, 2009.

Though it was initially announced that Hef will be the one to give the bride away, Wilkinson stated that she is having second thoughts about having him walk her down the aisle.

The ‘Kendra’ show premiered on June 7 and had a record breaking number for E! with 2.6 million viewers, becoming the highest-rated reality show debut for the network since 2002’s premiere of ‘The Anna Nicole Show’.

To date, E! has ordered eight episodes, so we will probably miss Kendra’s new ride. Luckily, she has a blog where she keeps her fans in touch with what’s new in her life, including the changes in her garage.