2 Himiway's New e-Bikes Are Inspired by the Animal Kingdom, Offer Ranges of Up to 80 Miles

Fiido's New Cargo E-Bike Is Sturdy, Fast, and Equipped to Go the Distance. On or Off-Road

The Chinese manufacturer who offered us the affordable, reliable D11 folding e-bike is back with another model, this time an electric cargo bike.
8 photos

Emission-free, motorized, sturdy, and with plenty of storage space on them, electric cargo bikes have increased in popularity tremendously in recent years. More and more people are seeing them as a cleaner alternative to cars, one that is fast and convenient enough to consider.

Fiido’s new T1 cargo e-bike is not the most original-looking utility two-wheeler out there. In fact, if you’re into these kinds of bikes, you might see a clear resemblance to the Rad Power RadRunner, both in looks and some specs.

We’re not sure if this is a coincidence or a lack of inspiration on Fiido’s part, but apart from that, the T1 looks like a solid, reliable vehicle meant to go the distance, on or off-road. It also seems to offer more than what you get with Rad Power’s cargo bike, for approximately the same price.

Designed to tackle any terrain, the T1 bike is equipped with 20 x 4.0” fat tires that boast an anti-skid tread pattern. And to make sure you don’t experience any bumpy rides, Fiido also threw in a shock-absorbing suspension fork in the front. The step-through frame is made from aluminum alloy and, just as you would expect, the T1 is not exactly feather-light, weighing a total of 36 kg (80 lb).

Fiido’s T1 bike packs a 750W rear hub motor (just like the RadRunner) but claims to reach a higher top speed of 50 kph (31 mph). It also comes with a 7-speed derailleur.

An LED display offers the most important stats of the bike.

And with this being a cargo bike, the T1 includes a front basket and a solid, low rear rack with a wooden deck.

Fiido’s T1 electric cargo bike is now available to order on the official website for a price of $1,600.

You can watch the two-wheeler being put to test in the video below. 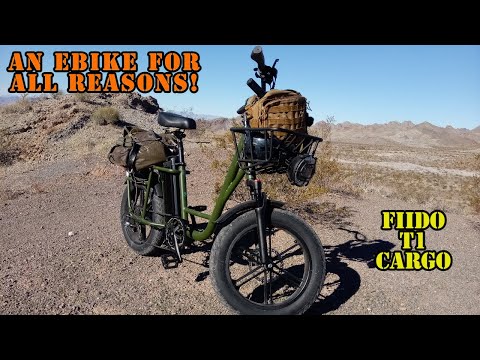