4 Lamborghini Urus with Fi Exhaust Sounds Like a Riot

The fifth generation of the legendary Toyota Supra has had a rather long gestation period despite Toyota sharing the development with BMW, and when it finally went on sale it was received with somewhat lukewarm reactions.
8 photos

Some argued that the BMW parts on it are too blatantly un-Toyota-like, which should have been expected in the first place since the GR Supra is essentially a coupe version of the BMW Z4 M40i with a different exterior shell.

Others were let down by the rather large number of fake intakes present all around the car, even though that is a trend followed by almost every single mainstream carmaker.

Very few people were disappointed by the GR Supra's lack of grunt or exhaust decibels, but now there a cure for that also.

The peeps at Frequency Intelligent Exhaust recently took care of that by developing a downright screaming exhaust system that also adds 22 horsepower to the BMW-sourced inline-six engine.

Thanks to parts like a valve-controlled Catback muffler, catless ultra-high flow downpipes and two tips engulfed in carbon fiber, the GR Supra with FI Exhaust is up to 30 decibels louder than the stock version, which is not exactly that muted to begin with.

The results measured in the following video scream for themselves. While the stock exhaust emits up to 97.8 dB, the FI Exhaust with the valves closed goes up to 119 dB. That's loud enough on its own, but you can also open the valves and the peak noise level rises to about 131 dB.

To put things into perspective, it's about one decibel louder than sitting near a military jet aircraft taking off from an aircraft carrier with the afterburner on. For reference, EU laws will soon mandate that cars shouldn't emit more than 74 decibels for newly registered cars and 150 decibels can easily rupture your eardrums. On that bombshell, do be careful with the sound volume during some parts of the following video. 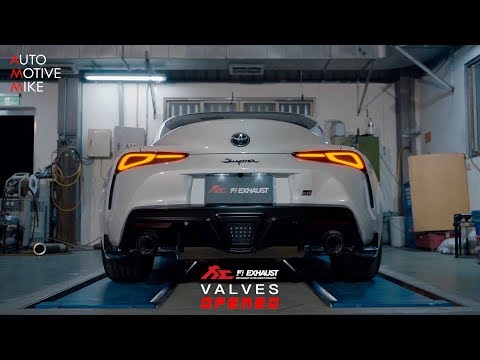