3 Toyota Believes a Mix of BEVs, PHEVs, and HEVs Is the Way to Decarbonization in Europe

The 2019 Toyota Supra was one of the most awaited sports cars of the year. It wasn't only the glorious history of the car, but also because it had a BMW engine in it.

The 2019 Supra was the fifth-generation of the famous Japanese sports car that evolved from another famous Toyota: the Celica. The first generation was named Celica Supra. Over time, the two models evolved in different ways. The Celica went for the rally and the Supra went for street and track use. The fourth-generation featured a famous engine, code 2JZ, which was loved by the tuners community and was modified to obtain over 1000 hp. But that was a time when the CO2 emissions were not measured and counted.

In 2019, the fifth-generation Supra was unveiled as a coupe-only model. Its predecessor had a targa version but that was not the case anymore. The Supra featured a very aggressive design with a sharp nose and headlights. The manufacturer said that no line was traced without an aerodynamic study and everything on the car was functional. All the vents and fins were installed to work.

Inside, there were many parts and units that showed a link with the BMW. The infotainment system was a carry-over from the German car-maker, but with different software installed.

For the technical part, both cars used the same inline-six, twin-turbo BMW engine mated to the same 8-speed automatic transmission. In the rear, the limited-slip differential was a standard fit for the Supra. 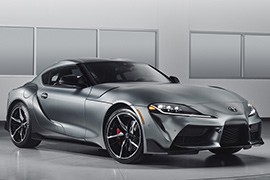