Emirati Billionaire Gets His $70M Yacht Lusine Delivered, It's a 197-Ft Floating Palace

Netherlands-based shipbuilder Heesen Yachts just delivered its first vessel in 2022, and it is a $70 million beauty owned by a well-to-do politician from the United Arab Emirates.
7 photos

Saeed Al Maktoum, who also happens to be the CEO of the Emirates Group, one of the largest international aviation holding companies in the world, bought the Lusine superyacht in 2018 and now the ship was finally delivered.

The exterior of the high-class yacht was handled by Omega Architects, while the interior design was completed by Sinot. With a steel hull and aluminum superstructure, Lusine, which was initially known as Project Falcon, measures 197 ft (60 m) in length, and it is so far the largest ship built by Heesen. However, it will lose that title once the 262 ft (80 m) Galactica (which is now in the making) is completed.

Lusine has an enclosed volume of approximately 1,060 GT and is powered by two MTU 12V 4000 M65 diesel engines. It boasts a range of 4,200 nautical miles at a cruising speed of 13 knots (15 mph/24 kph) but can reach a top speed of 17.5 knots (20 mph/32 kph). Heesen takes pride in the yacht being the first one in the world to feature the SCR (selective catalytic reduction) system alongside the MTU engines.

Designed to meet the high standards of opulence and sophistication of its owner, Lusine exudes elegance and calmness and flaunts one of the most complex interiors created by Heesen’s artisans. It can accommodate up to 12 guests in six staterooms and its layout is conceived in a way that allows the crew to perform their duties without disturbing the visitors in any way.

Rare woods, exquisite leathers, and fine fabrics were used for Lusine’s interior, as well as bespoke metal and glass, custom-built furniture, and lighting.

There’s a glass elevator that goes through all its decks, a touch-and-go helipad, floor-to-ceiling windows that offer breathtaking panoramic views, and two garages for tenders and water toys, to name just a few of its most notable features.

Before being delivered to its owner, Lusine had to go through intensive trials in the North Sea, proving that it can reach its contractual speed of 17.5 knots and can behave well in various weather conditions. The yacht confidently nailed all its tests in sea state 5 with winds up to 30 knots. You can watch it in action in the video below. 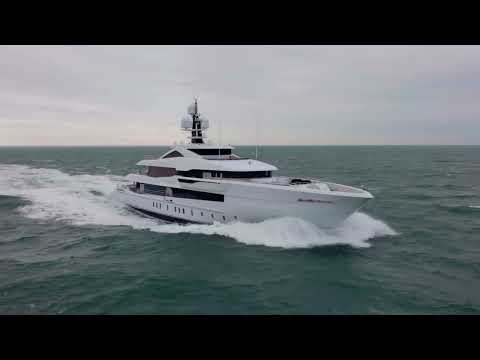