2 SpaceX in Talks With Apple to Offer Starlink Connectivity to iPhone 14, Not Gonna Happen

3 NASA Astronaut Won't Live in Elon Musk's Mars Colony, "It Would Be Horrible"

5 Elon Musk Loves the Boxabl Casita, and So Will You – Boxabl CEO Talks to autoevolution
Up Next

Don't Be Alarmed If Your Tesla Starts Whistling Dixie While Parked, It's Being Fixed

Elon Musk Talks to Jay Leno About His Plans to Colonize Mars, Shows Him the Rockets

Home > News > Space Junk
Elena Gorgan
For all the chitter-chatter Elon Musk likes to engage in on social media, he is a true “get” when it comes to a conventional interview, either for television or the written press. Put it differently, Elon Musk rarely gives interview, so when he does, the world pays attention.
8 photos

His most recent was with Jay Leno for the upcoming episode of Jay Leno’s Garage. The full interview will premiere on CNBC on September 21, but available at the bottom of the page is an almost-10-minute-long preview. It’s both revealing and enticing enough to get you to want to tune in for the whole thing.

As noted above, Elon Musk rarely does interviews, and that’s only partly because of his frayed relationship with the media. Another reason would be that he simply doesn’t have the time for it, what with working to revolutionize and electrify the automotive industry with Tesla, and trying to send man to space to ultimately colonize Mars, through SpaceX. But Musk and Jay Leno share a special connection, so he will occasionally do interviews with him.

This is one such occasion, and it sees Leno visiting Starbase in Texas to have a look at Musk’s rockets and discuss his plans to colonize Mars. Musk has spoken before about his plans on turning mankind into an interplanetary species, as well as his belief that this can only be possible if space exploration is done by means of reusable rockets. What this interview (or the preview, better said) brings new to the table is a timeframe for said colonization.

Musk takes Leno for a tour of Starbase, shows him the rockets and explains that the ultimate goal is to produce one rocket per month, before progressing to one rocket every three days in a few years’ time. SpaceX aims to build 1,000 such rockets, which will carry 1 million people to Mars in the space of 20 years. One million people are enough for a self-sustaining colony on the Red Planet, so it would be enough to consider it a viable alternative to life on Earth.

For someone who has been keeping up to speed with the developments of SpaceX, this interview is probably not Earth-shattering news. But it does paint a more accessible and easy-to-understand picture of space exploration, and it does offer a clearer look at Musk’s plans regarding the colonization of Mars. For all his faults, Musk is a very compelling figure, so the few interviews he gives are always a must-see (or read, depending on the medium). 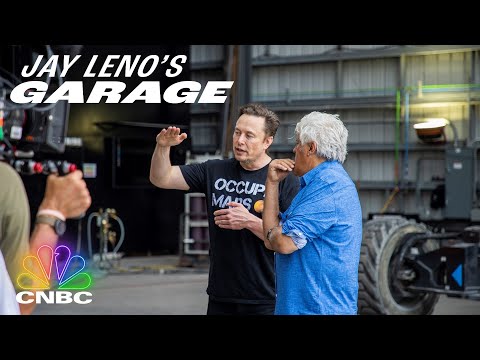