4 When MIT Students Build an Electric Racer, This Is How It Looks Like

An electric race car made history earlier this month after it received a battery swap during a pit stop. The swap itself took two minutes to accomplish, and it happened during a known sanctioned race (NASA rules). We are referring to the 25 Hours of Thunderhill event, which was shortened by fog to just over 17 hours of racing.
8 photos

Regardless, Entropy Racing's EVSA managed to complete 346 laps of the Thunderhill circuit in California, which adds up to 1,038 miles (ca. 1,670 km) in 17 hours, 9 minutes, and 12 seconds. That is an average speed of over 60 mph (ca. 97 kph), which is impressive if you consider the circumstances.

This race, the 25 Hours of Thunderhill, is the longest automobile race in the United States, and it is held each year during December. The event was held on the original three-mile track, which is now known as Thunderhill East.

The same track also has a two-mile circuit, and both can be combined to offer a five-mile track, which would make it the longest road course in America, but that was not the configuration of the 25-Hour Endurance race that took place in the first weekend of this month.

The event in question is sanctioned by the National Auto Sport Association in the U.S., which makes the battery swap a first of its kind. Up until 2018, the first-generation Formula E race cars had to be changed during the race to prevent the necessity of swapping the batteries. Meanwhile, the EVSR is designed to do that, so it was all in a day's work for the team.

Despite taking two minutes to swap out its batteries and having to do multiple pit stops of this kind, the EVSR finished ahead of seven other cars in the 36-entrant field. Five of the cars it beat were still competing when the race was shortened because of fog conditions.

That still counts as a race, and Team Entropy Racing has achieved something special here, as this is an electric vehicle designed for grassroots racing for amateurs.

It all started with Charlie Greenhaus, the founder of EVSR, who decided it was time to make EVs accessible to amateur racers and ensure that they are also competitive. His first project was one for a customer who wanted an all-electric Lotus 7, and the project moved on from there.

The EVSR name is an acronym for Electric Vehicle Sports Racer, and it is meant to be a budget-friendly electric vehicle that would be capable of being faster than a Spec Miata in a full sprint race without running out of energy or breaking down.

For those who are unfamiliar with Spec Miata, it refers to a class of SCAA-approved races across the U.S. Since the Miata is popular on a global level, the Spec Miata models are known as the Global MX-5 Cup in other countries. They come with stock engines and minimal modifications to make them safe, reliable, and affordable to race by amateurs working with a strict budget. 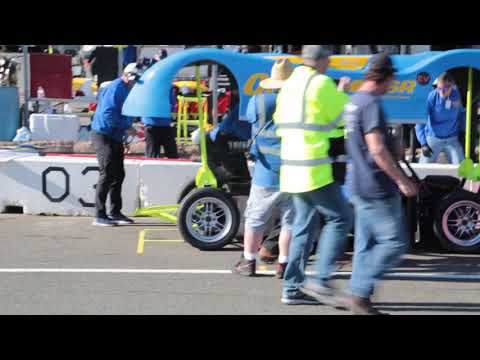