3 No Cabin, NVIDIA-Powered Self-Driving Truck to Start Selling This Fall

Einride T-log Autonomous Truck is the Perfect Tool for Lumberjacks

West Sussex is where all the automotive action takes place these days thanks to a very special yearly event. Unlike a traditional auto show, the Goodwood Festival of Speed is the perfect venue for companies to present everything from self-driving cars to Mars-roaming rovers.
6 photos

There are countless premieres taking place at Goodwood starting Thursday. One for every taste or industry, it seems. There’s a premiere even for lumberjacks and the logging industry.

Einride is a Swedish transport company that set out to revolutionize industrial transport by creating self-driving trucks. A while back, Einride said the technology is advanced enough to start sales of the cabin-less T-pod truck, an all-electric, autonomous transporter, as soon as this year.

At Goodwood, Einride brought another version of the truck, called T-log. This one is equipped with all the tech needed to make it capable of tackling the off-roading conditions of the woods. T-log lacks both the driver’s cabin and the cargo one, being fitted only with support struts so that the newly chopped logs don’t fall off.

Since it is meant to operate in areas that are not so easy to map and understand for an autonomous system, T-log can be operated from afar by remote. Because it uses the NVIDIA self-learning software, as soon as the truck's brain understands its surroundings, it could then become capable to drive itself.

The truck is powered by battery packs that give it a range of 125 miles (200 km), the same as its older brother, the T-pod.

Einride says it plans to make the T-log available to lumberjacks and others sometime in 2020. The company hopes to carry most of Sweden’s heavy loads with the two trucks. 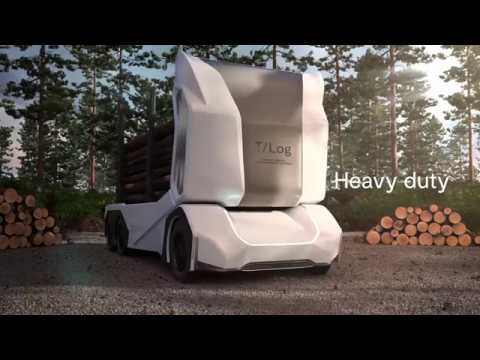