5 Windowless Autonomous Electric Truck to Roam through Sweden by 2020
Car video reviews:
Up Next

No Cabin, NVIDIA-Powered Self-Driving Truck to Start Selling This Fall

Tesla’s Semi is about to get itself into a fight, should Elon Musk ever decide to send his class 8 electric truck to Europe. Einride, a Swedish transport company, announced this week that the cabin-less T-pod, an all-electric, autonomous transporter, will hit the streets this fall.
1 photo
The most intriguing feature of the truck is that it has no cabin for the driver. Because it has no driver. Usually, autonomous vehicles are required to be accompanied by humans, so we’re curios to see who and how would get a permit to operate such a machine on public roads.

To be able to get about, at least in theory, without any incident, the T-Pod will rely on NVIDIA’s Drive AI platform. The technology would make it possible for the truck to plan a route and also sense its environment. Remote operations of the vehicle, should it be required, is also possible.

The 20-ton, 200 km (125 miles) on a charge truck is capable of carrying 15 standard pallets, for a total weight of 20 metric tons (33,000 lb) with a full cargo. The first route the T-pod is likely to operate on would link the cities of Gothenburg and Helsingborg in Sweden.

The goal is to have the machines transport some 2 million pallets each year, amounting to a reduction in CO2 levels of up to 33,000 tons, the company estimates. The target is even bolder for the midterm future, as Einride hopes that by 2035, 20% of road transports in Sweden to be made with T-pods.

“The T-pod has the potential to disrupt the transport industry since diesel is getting more expensive while battery technology is getting cheaper and better,” the company says on its official website.

“The T-pod system is the first solution creating a competitive offer to the heavy truck transport market.”

The company has not announced pricing for the what may turn out to be a revolutionary concept. 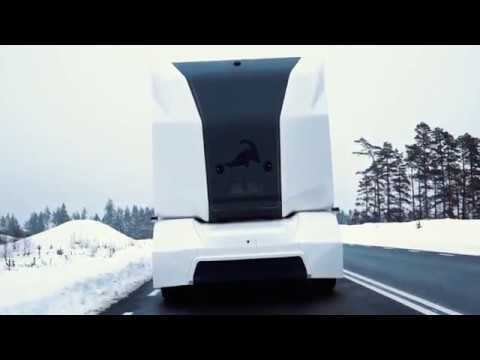