5 Race the Tesla Semi on a Track by Advocating the Tesla Newsletter
Car video reviews:
Coverstory

Since their presentation on November 16 (a day which will live in infamy) last year, both the Tesla Semi and the next-gen Roadster have been pretty shy in their public appearances.
1 photo
The electric truck has been spotted once driving through Tesla's complex in Fremont, while the red sports car has only recently started to show its mean face while sitting pretty for the visitors of the Palo Alto headquarters or testing its powertrain on the Fremont track.

Well, that means the company's upcoming electric truck was trailing by one appearance, a deficit that was duly canceled today thanks to this unexpected sighting posted by YouTube user Richard Fielder. He managed to catch the Semi while performing one of its trademark acceleration runs, something we didn't come to expect from this type of vehicles in the past.

During the launch event, Elon Musk said the vehicle would be able to hit the 60 mph benchmark in just five seconds, a number that would make a few hot hatches bow their heads down in shame. We've been treated to a few demonstrations during the demo runs that came after the presentation, but this is probably the first time we've seen it go at it in the wild.

Well, we say "wild," but that's actually a reasonably densely populated area. In fact, look closely and you'll see a 25 mph (40 km/h) speed limit sign that almost looks like the truck uses as a start point for its acceleration. There's no way of telling how fast it went or how quickly it got there, but it clearly broke the speed limit in that area by a margin.

It also left a trail of rubber on the ground, suggesting there's more wheelspin than with a Model S P100D - a trend we've also seen on the Roadster II prototype. By the way, we still feel a bit dirty for mentioning a full semi truck and a sports car in the same sentence when speaking about their acceleration capabilities.

It's not entirely clear why Tesla is moving the truck around so much lately, especially since a more conclusive trial would have it attached to a loaded trailer, but since we've entered the year ahead of its release, expect testing to intensify. Later on, Tesla plans to use it for moving things around between its Fremont plant and the Gigafactory in Nevada, a run which should clear any remaining doubts about its ability to go 500 km (310 miles) on a charge. 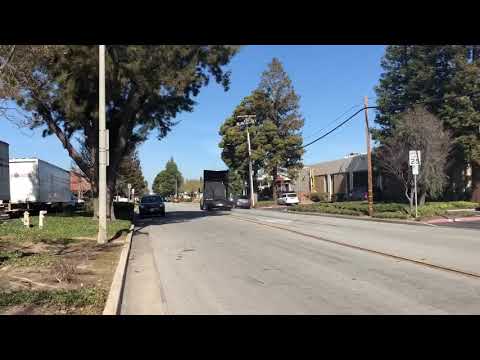