2 Tesla Hater Attacks Car and Driver with a Hatchet

As some of you probably know by now, the Tesla Semi is currently undergoing its first tests on public roads with cargo trailers attached to the tractor head.
1 photo
That means the battery-powered heavy-duty truck is finally doing what it was designed for, instead of wowing everybody with its incredible acceleration. Oh, wait a minute. Does it still do that with the trailer hitched to its back? OK, nevermind.

Yes, apparently towing a full-size trailer isn't enough to convince the Tesla Semi and its driver to lay off the accelerator. In fact, that may have been a direction from their superiors: "just keep smashing that pedal no matter what. Maybe keep an eye out for police, though, we'd hate to have to give you a forced leave for the following months."

Of course, some backstory would have been nice. For instance, knowing whether the trailer was full, half-full, half-empty (we're politically correct here, so we don't discriminate between pessimists and optimists) or completely empty makes a very big difference. A few good tens of thousands of pounds, to be a bit more exact.

Nevertheless, seeing the Semi pull off like that is enough to paint a completely different picture to the one we would have been looking at if it were a conventional diesel-powered truck in its place. Yes, it would have been a much slower, noisier, and jerkier affair.

The Tesla Semi doesn't have to shift through 16 gears to make the best use of its power, which allows it to sprint forward in one smooth and continuous movement. As for the soundtrack, you can definitely hear a pretty strong whine, but it's still nothing compared to the sound of a large diesel engine under strain. Not to mention there's not a cloud of black smoke to be seen.

One thing this video doesn't capture - it couldn't have - is the look on the faces of the drivers the Semi cut in front of. If they weren't the Internet-savvy type, this must have been as close to a third-degree encounter as they could get. 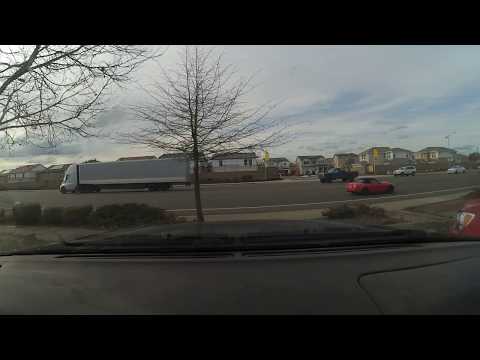