3 Daimler Trucks Executive: "If Tesla Semi Delivers, Something Has Passed Us By"

5 You Can Drive the Tesla Semi Truck and Roadster II in GTA 5
Car video reviews:
Coverstory

After a pretty quiet phase, we started having more and more spottings of Tesla's electric truck, but the Semi was always caught without any trailer hitched to the tractor head. Well, not anymore.
1 photo
Up until this point, the only time we had seen the Semi complete with a cargo trailer was during its first presentation last November (with the Roadster II sliding out of one, remember?) and in the official photos. Other than that, the truck has been zipping around without actually doing any work.

With a 0-60 mph acceleration time of 5 seconds (or better, as Musk warns us), it's easy to forget what the Tesla Semi is meant to do, which is ferry stuff from one point to another. According to the current stats, it can haul 80,000 pounds (over 36 tons) for a maximum distance of 500 miles (about 800 km) before it needs recharging, which is a lot more than any other battery-powered truck could hope for over the next few years.

Musk has been boasting the Semi's capabilities even before the truck was unveiled, and his confidence in the project hasn't dipped since. He says the heavy-duty vehicle should pay for itself in just a few years considering the lower running costs and that it would win a tug of war with any comparable diesel truck with the Tesla going uphill.

The bit we've seen so far appears to confirm it'll have unparalleled acceleration, but what the clients and we would like to know is how it fares with a fully loaded trailer hitched at the back. Well, for one thing, its wheels certainly didn't spin when setting off, nor did they leave a trail of rubber on the ground.

After being spotted at the Rocklin Supercharger (not a very difficult task considering they do tend to stand out among other Tesla vehicles), some of the fellows there chased the two electric trucks as they went back on their way. It's not clear what the pitstop was all about - whether they needed charging or was just part of the test - but since one of the trucks might be the short-range version (just 310 miles or 500 km), it topping its battery would make sense.

Electrek says the trucks are carrying battery packs from the Gigafactory 1 where they're made to Tesla's Fremont plant, where the actual vehicles are assembled. If that's the case, it's not hard to imagine the trailers were filled to the maximum allowed weight since the batteries are rather heavy.

That's just guessing, but either way, seeing the trucks pull off and leave that poor Chevrolet Volt wondering where they had teleported while catching up speed on the on-ramp is darned impressive. Check it out for yourself in the first video below (around the 1:47 mark). 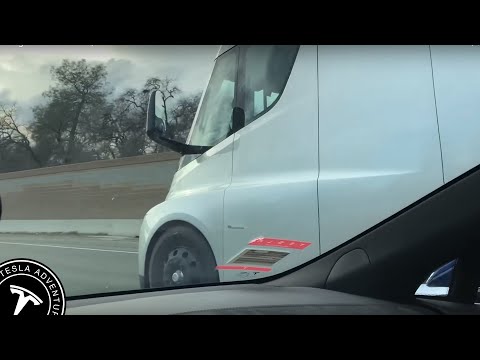 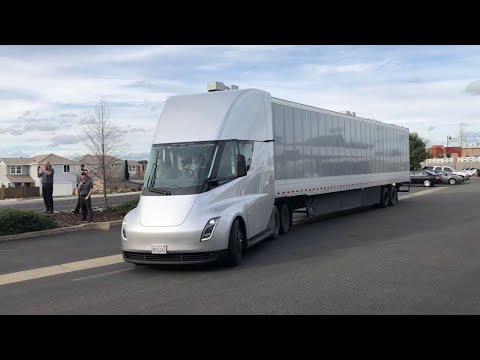