2 Air Taxis Soon to Fly Over Bali, as a Chinese eVTOL Manufacturer Scores Its Largest Order

The Chinese eVTOL (electric vertical take-off and landing) manufacturer has shared images from the World ATM Congress, the world’s largest international air traffic management (ATM) exhibition, and Expodronica 2022, where its recent collaboration with multiple partners in Spain seems to be confirmed.
9 photos

EHang is currently displaying both the EH216 and Falcon AAVs (autonomous aerial vehicles) at this event, where it’s joined by three of its “strategic partners” from Spain, namely Aeroports de Catalunya, Bluenest, and Policia Nacional – Spain’s national police force.

Last year, the collaboration between the Chinese company and the Spanish Police was just a rumor, but the eVTOL prototype showcased at Expodronica 2022 confirms the official partnership.

EHang has enjoyed a remarkable success with the EH216 AAV so far. Scoring its first order in December last year, it has now added multiple partners in Asia and Europe.

Just last month, the company conducted demo sightseeing flights in the gorgeous natural surroundings of Aizhai Wonder, a tourist area in China, during the Workers’ Day holiday. eVTOL.com reports that, following the demo flight, EHang was awarded a contract for extended aerial sightseeing routes in China.

These two partnerships are a good example of the Chinese-made AAV’s versatility. The EH216 can conduct law enforcement missions just as easily as it takes tourists on breathtaking relaxing flights. Powered by 16 electric motors, it can fly at over 9,800 feet (3,000 meters), at speeds of up to 80 mph (130 kph).

Officially a short-range AAV, it’s not meant to cover distances greater than 22 miles (35 km). In terms of capacity, it has enough room for two passengers and a maximum payload of 485 lbs (220 kg). It takes two hours to fully recharge, but doesn’t require special airport infrastructure, which makes it easier to operate in various locations. The EH216 is currently undergoing the certification process in China. 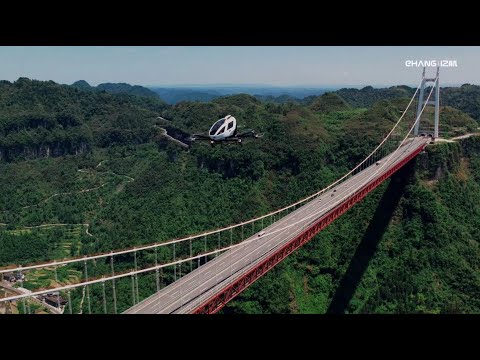