It’s been several years now since Chinese AAV (autonomous aerial vehicle) manufacturer EHang introduced the world to its game-changing air mobility solutions, yet we are still waiting to take a ride in its highly anticipated air taxis. But even so, the company seems to do just fine, announcing that it just landed its biggest pre-order in Japan.
6 photos

EHang recently announced that Japan-based helicopter service provider AirX has placed a pre-order for 50 units of its EH216 AAV, which is the company’s dual-seat autonomous air taxi. AirX’s reservation platforms allow clients to book trips for over 100 helicopter sightseeing routes and private charters in Japan. So far, it boasts of having served more than 15,000 chartered flight customers.

According to Tezuka Kiwamu, AirX CEO, the EH216 autonomous aerial vehicle can provide tourists with cost-effective aerial sightseeing services in a safe and convenient way, which is why EHang has been chosen as a partner for its business.

With vertical take-off and landing (VTOL) capabilities, the AAV is a space saver that doesn’t require large runways or airports to operate, which makes it a more convenient and effective solution for urban air mobility.

In addition to the EH216, the Chinese manufacturer is also working on a long-range electric two-seater called the VT-30, which claims that can cover distances of up to 186 miles (300 km) on a charge.

EHang hopes that the large AirX pre-order will facilitate several UAM (urban air mobility) projects in Japan and may provide air taxi services for the 2025 World Expo in Osaka.

You can watch one of the EH216's latest test flights in the video below, at the Fukushima Robot Test Field in Japan. 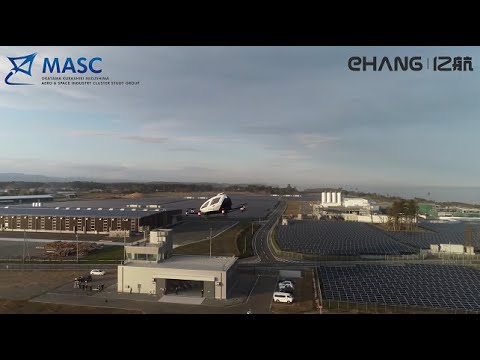