Outdoor vacations don’t have to cramp your lifestyle, by limiting you to the bare necessities when you get on the road. GoSun’s new solar-powered fridge can make your summers cool without needing as much as a cube of ice.
5 photos

GoSun is all about using the power of the sun to fuel our everyday appliances. It already has some cool solar ovens and coolers on the market and has recently launched a new Indiegogo campaign for its new “chillest” addition.

GoSun Chillest is an update to the company’s Chill solar cooler, released in 2019. This new solar-powered fridge has a larger, 45-liter (11.8-gallon) capacity, which in more relatable terms means it can hold up to 60 beers.

The new appliance has two separate compartments and you can use one as a fridge and the other as a freezer.

GoSun Chillest comes with some really impressive cooling abilities. It has a built-in 100 Wh (watt-hour) lithium battery that has a 10-hour lifetime. There’s also a solar table included that can be attached to the fridge and provides an additional 25W of solar power. And yet a third, optional external battery for the Chillest gives you 30 more hours of cooling power.

This portable fridge is an energy-efficient appliance that only consumes 45W, as supposed to a regular blender that has a 500W consumption or a microwave that uses 1200W, according to GoSun.

The two compartments of the Chillest come with individual temperature settings, and you can adjust them between -4 and 68 °F (-20 and 20 °C).

There are also some really nice accessories included with the Chillest, such as a bottle opener, organization baskets for your food and beverages, tie-down straps, and a cutting board. You can also opt for a Bluetooth speaker that you can attach to the side of the fridge and an umbrella.

GoSun’s Chillest portable fridge has already reached its goal of $15,000 on Indiegogo. GoSun has raised almost $160,000 so far, with 30 more days left in the campaign.

Chillest requires a $579 pledge, for just the basics, but we figure you’ll also want the solar table, which means you have to pledge $100 more. The estimated delivery time is July 2021. 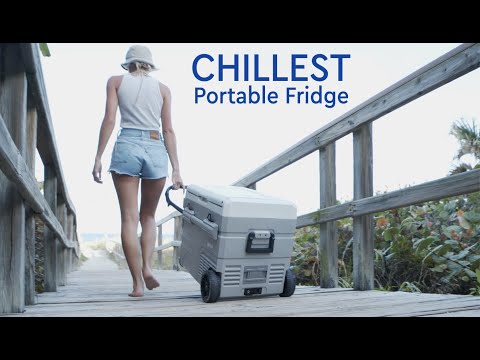