3 Lamborghini Urus Drag Races BMW X6M in $370K Encounter, All Bets Are Off!

Produced in Mexico instead of the United States like the actual Mustang, the Mach-E is offered in right-hand drive for the UK market. One of the first examples of the breed received the stamp of approval from Carwow’s Mat Watson, but nevertheless, some flaws could’ve been avoided by Ford.
76 photos

I’m not referring to the flawed software that bricks the Mach-E while charging, but the physical button for the demist located right next to the light switch. It’s joined by a digital button on the infotainment system as a redundancy that hasn’t been designed with the user in mind.

Mat cannot fit a large bottle of water in the door bin either because of the speaker's awkward shape. On the upside, he does like the ample legroom for the rear occupants and the quality fit and finish of the interior.

A bit on the lacking side of trunk compartments, the Mach-E makes do with 402 liters (14.1 cubic feet) compared to 543 liters (19.1 cubic feet) for the VW ID.4. There’s extra storage under the hood, but don’t get your hopes up for anything other than a bag with the charging cable and a small backpack.

On the driving front, the only point of criticism is the rubbery steering feel although “this car goes around corners better than you might expect. But ultimately, there’s no getting away from the fact that it’s quite a heavy car.”

Mat highlights that a Tesla Model 3 handles better, which is understandable given the lower center of gravity and weight, “but really, neither handle like a proper V8 Mustang.” The suspension could use better calibration as well because it appears to be constantly working too hard in town and at speed.

The learning curve for the uncanny brake feel also needs to be mentioned, but still, it's not that big of an issue. That said, should you avoid the Mach-E, consider it, shortlist it, or go right ahead and buy it? According to Mat, the Mexico-built electric crossover is definitely worth shortlisting. 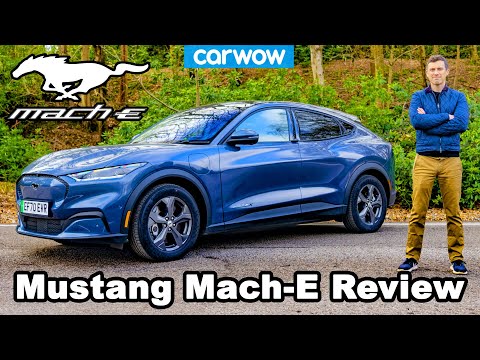