Lamborghini Urus Drag Races BMW X6M in $370K Encounter, All Bets Are Off!

Drag racing between two rather large SUVs may seem pointless to most people, but you can't help but acknowledge the fact that it's slightly more exciting than watching two pickup trucks doing the same thing. We're at a point where these Super-SUVs can often be faster down a straight line than most passenger vehicles, and today we're looking at two of the fastest options on the market.
16 photos

If Ferrari does come out with a Super-SUV of its own soon, that is likely to become the new king of its category, but until then, we're looking at a select few options on the market, that all revolve around 600 horsepower levels. There's the Bentley Bentayga, which has a twin-turbo W12, and also the Audi RS Q8, which comes with a V8, fitted with a twin-turbocharger system as well.

The Cayenne Turbo S E-Hybrid is one of the most powerful options around, with 671 horsepower on tap, but it's slightly outshined by the Jeep Trackhawk, which gives its driver access to 707 horsepower! Depending on your available budget, there are also several other options like the Alfa Romeo Stelvio QV, the Mercedes-Benz AMG GLE 63 S, the Aston Martin DBX, the Rolls Royce Cullinan, and of course the Lamborghini Urus and the BMW X6M.

Most Lamborghini enthusiasts will probably agree that the X6M doesn't stand a chance against the Urus, and on paper, it does look like the Italian Stallion has the upper hand, with 641 horsepower and 627 lb-ft (850 Nm) being squeezed out of that 4.0-liter twin-turbo V8. Not to mention the fact that it's also considerably lighter, at 4,850 lbs (2,200 kg). But this being a Lamborghini, you do have to pay an extra £46,925 ($65,084 USD) compared to the BMW.

As the two drivers line up for the race, Matt Watson who's in the BMW does note that "These BMWs launch super hard, so I might be able to beat him in his Urus". Before taking off, the two engage in an exhaust-note show-off, and the Urus is the winner without a doubt. Even though the track is soaking wet, both vehicles have AWD, and as soon as they get the signal, the BMW takes the lead, leaving the Urus just slightly behind.

At the end of the quarter-mile (402 meters), the X6M comes out on top, much to the surprise of both drivers. The conclusion is that the Urus might have started too slow, so a rematch was in order. For the second run, they're neck and neck going off the line. The race is over in 11.7 seconds for both cars, but the X6M is once again just slightly ahead and takes the win.

But it's not over, as they decide on a third run, this time with both cars being switched to Comfort/Street driving mode, with traction control now being active. To switch things up a bit, they also decide on going for a rolling start, aiming for a 50 mph (80 kph) pull. There seems to be some sort of delay with the Urus, and the X6M jumps ahead, going all the way up to about 150 mph (241 kph) and winning the first run.

The two drivers then switch the cars back in their sportiest settings and do the rolling run once again. On this occasion the situation is different, and the Urus is victorious for the first time, as they reach speeds of about 160 mph (257 kph). They do a re-run and they end up with the same result. For the last test of the day, they look at the stopping power of two SSUVs, and oddly enough, the BMW X6M comes out on top once again. 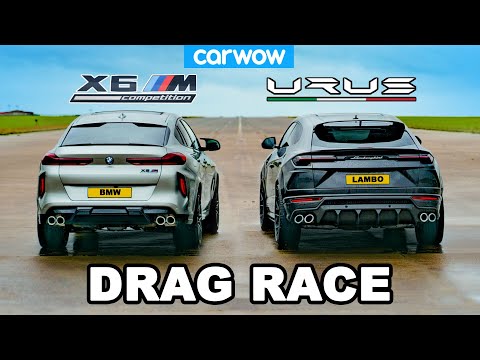