3 Always Get Insurance With Your Rental: Family Caught in Bison Stampede

In today's gig economy, as some call it, many have found ways to obtain income from things that used to be just property. Peer-to-peer car rental is one of the ways that may work for some, and now we know how much money can be made from hosting two Tesla Model 3s for rent on Turo.
7 photos

The figures come from a video made and posted by Ryan Levenson, the EV Cannonball Record holder, as well as a former employee of Tesla Motors. Over one year ago, Ryan founded The Kilowatts, and he, along with his business partners, financed two Tesla Model 3 vehicles that they offered for rent on Turo. These two vehicles are a part of a larger fleet, so this is not their start in business but rather a continuation of an existing one.

Ryan made a video about the entire host experience and revealed figures that are interesting, to say the least. As the video's title says, the two Tesla vehicles made $45,000 in 2021.

As Ryan Levenson underlines, he and his business partners were curious if customers were willing to pay more on Turo to get the Long Range Model 3 or if they would prefer to experience a Tesla at the lowest possible price.

While having the possibility to buy several cheaper vehicles for the price of a Model 3, the company preferred the American electric sedan due to its ease of use, as well as its Key Card system that facilitates rentals.

Before anyone gets any ideas, Ryan rents vehicles on Turo as a business, and he has others to use for his daily requirements. We presume that he ran the math on them before making such a purchase, and this is revealed in the comments section, where we dared to wonder so that you did not have to.

By the way, his EV Cannonball Record was done in a Model S rented on Turo. Coming back to the topic at hand, the video revealed interesting information on what customers usually do with a rented Model 3 on Turo, as well as how much money can be made from this.

First, as Ryan explained to a user on YouTube, to break even on car ownership, on the Tesla Model 3, at least, each vehicle needs to be rented "roughly 10 days per month." Otherwise, they do not get a return on their investment.

Since the combined price of the two vehicles is close to $100,000, you might wonder if just two years of renting these two vehicles on Turo make them "pay for themselves." It does not work that way, but things might be favorable for a company that can afford to have multiple rental cars available

As The Kilowatts channel's administrator replied in a comment on YouTube, the company nets "about half of the $45,000 earned by the vehicles last year after paying for insurance, financing, and maintenance." The latter includes fixing curbed wheels every six months, as well as changing tires.

These figures only work if the vehicles are undamaged, clean, and if nothing happens to them. Each day spent without a renter means losing money, so do not try to replicate this on a shoestring budget, as it might not work out for you. 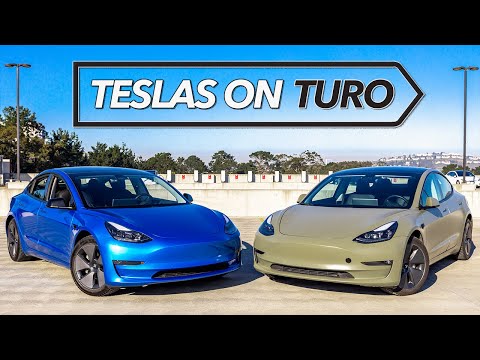