2 When a Slightly Pink Koenigsegg One:1 Made a Red LaFerrari Look Normal in China

4 World's First 3D Printed Brake Caliper is Made by Bugatti

Ever since its renaissance in 2005, the name "Bugatti" has stood for ridiculously powerful hypercars that mix it all up with a hefty dose of luxury for a mind-numbingly expensive package.
21 photos

The Veyron was the first to test the water, and judging by how well it sold - the original model as well as the countless "special" and "limited" editions that followed - Volkswagen rightly decided to continue in the same vein with its successor.

However, if the German automotive powerhouse was actually losing money with ever Veyron it sold in spite of its stratospheric price tag, it now manages to turn a profit with the Chiron which, admittedly, at $2.65 million, is even more expensive.

All that money buys you quite a few luxury amenities, and these usually mean the car won't exactly fit into the featherweight category. Indeed, the new Chiron is just shy of two metric tons, which makes it about 150 Kg heavier than the standard Veyron. A bit odd in an age when every new model brags about its weight savings, but there is a catch to that.

Apart from the extra lard, the Chiron also brings plenty more muscles. Instead of the Veyron's 1,001 hp original output, the Chiron gets 1,500 from its 8.0-liter quad-turbo W18 engine as well as 1,600 Nm (1,180 lb-ft) of torque. Combine that with all-wheel-drive, and you have all the ingredients of an actual drag race monster.

But if the Chiron is all about power (and luxury, but that won't help in a drag race at all), the vehicle in the opposite corner today is more of a math aficionado. It likes to play with ratios. Hell, even its name is one. It's called Koenigsegg One:1 and, as the name suggests, its weight is exactly the same as its power output, giving it a one-to-one power to weight ratio.

We're talking about 1,360 hp and 1,360 kg (almost 3,000 lbs), which makes for a power-to-weight ratio that's 33% better than Chiron's 0.75. The only drawback is that the Koenigsegg One:1 only sends its power to the rear wheels, meaning it should have a disadvantage off the line.

The saving grace for the Swedish hypercar is that the author of this clip, YouTube user Ericship, put together a standing mile race, giving the 'Segg enough time to catch up and go in front, if it's capable of doing. You won't get any spoilers from us so you'll have to watch the clip below for the outcome. Bear in mind it's all done using the Forza 7 video game, so real-world results may vary. For the time being, though, we're going to have to settle for this. 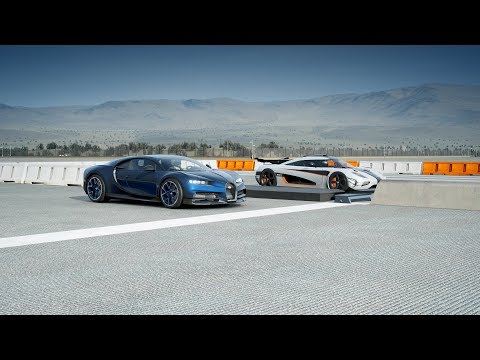