Sorry. I can't see something as being retro without somebody shoving 80s font and neon graphics down my throat. But if playing old music in a movie is considered retro, so should drag racing a BMW E30 3 against the Audi RS2.
2 photos

So you know about the RS3 already. It's that sedan/hatchback thing with the 2.5-liter turbo engine making 400 horsepower. So what the heck is an RS2, a city car? No. It's the classic RS, the one Audi make with a lot of help from Porsche. It's the first fast quattro wagon, and without it, we may not have had a Q8 or the RS6... or the RS Q3... or the RS5... anything

You think vinyl is expensive? Try buying an RS2. A mint condition example of one of these will cost you supercar money, but not because it's particularly fast. The same thing can be said about the BMW M3. The E30 is the originator of the 3 Series legend and still looks cool today, but as far as going fast is concerned... nothing did the crazy 4-second 0-62 times back then.

Now, Carwow has been bombarding us with awesome drag races all year, some of which have been controversial. But nobody is going to contest the battle between the E30 M3 and the RS2 because these are so hard to get ahold of, you might as well be racing museums or mansions.

A few specs before we start: the first RS2 features a 2.2 5-cylinder turbo with 315 HP while the BMW 2.3-liter has only 215 horsepower. But the BMW is much lighter. But the Audi has AWD, and the M3 doesn't. But what's going to happen?

Well, the M3 gets a jump-start because old turbo tech is bad. But once the RS2 gets on the power, it catches up in a big way. 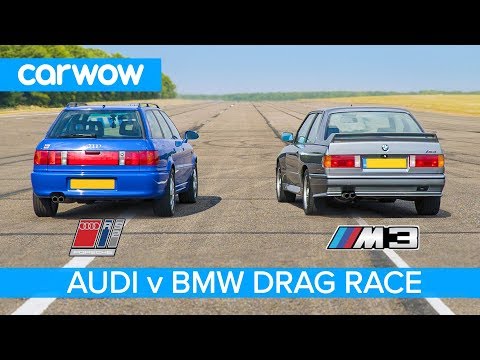