Mihnea Radu
There's a lot riding on the drag race between a BMW M5 and a Mercedes-AMG E63 S, for example., which is why you've seen it happen maybe a hundred times over the years. But for whatever reason, European automakers don't seem as competitive when it comes to pickup truck performance.
3 photos

That's why there's never been a drag race like this one, featuring all the most popular trucks sold in Europe. For some reason, we think nobody will care whether the Amarok is faster than a Ford Ranger. Then again, most car fans might not even know about anything other than the Toyota Hilux, which old Top Gear talked about at length.

This drag race fulfills our expectations in the sense that the pickup with the larger and more powerful engine wins. Which one is that? Well, in this case, the Amarok takes home the trophy, which must make VW reps in the UK very happy.

When we got to test this thing, it had a 2-liter engine, but eventually, Volkswagen decided "enough with nonsense" and fitted a 3.0 TDI in its place. This particular toy has the most powerful version with 258 horsepower, though the 204 HP model is much more common.

The X-Class had a good chance of competing because it too is available with a 258 horsepower diesel V6. However, the team at Carwow could only get a 190 horsepower 250 d model.

We feel bad for the Ford Range because it turned up to the party with a 160 HP diesel engine. They do make a nice 3.2-liter with 200 HP for some markets, as well as recently launching the bi-turbo Ranger Raptor. And putting reliability ahead of everything else, the Toyota Hilux only offers 150 HP in this situation, though you can get it with the Prado's 2.8-liter which makes more power and torque.

Hope we didn't miss anything... though we probably did. Here's the only drag race featuring European pickups we've seen all year. Enjoy! 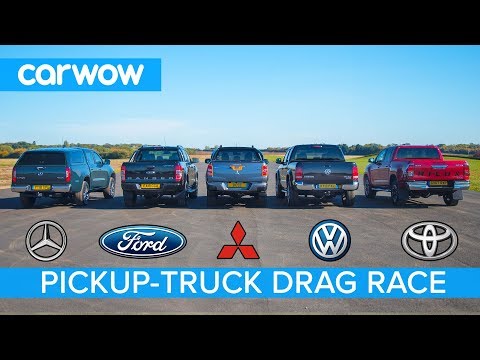